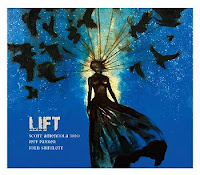 Think of musicians as diverse as Madeleine Peyroux, Will Bernard, Jessica Lurie, Nels Cline, Giovanni Maier, Larry Ochs, or musical projects like T.J Kirk, The Bottesini Project, Kihnoua, Plays Monk, and many more: the guy behind the drums is Scott Amendola: versatile, creative but rooted in traditional jazz with rock influences.

And so is Jeff Parker on guitar the perfect companion: equally versatile, playing with recently Jason Ajemian, Matana Roberts, Ingebrigt Håker Flaten, The Chicago Underground Trio, Ken Vandermark, Fred Anderson, ... The bassist on this album is John Shifflet, totally unknown to me.

The music is fun, great fun. Composed by Amendola, with great tunes, rhythms and harmonics, the music is a wonderful blend of old form with today's sensitivities: you hear the guitar of the old masters, but Parker is so brilliant in being funky and Latin and bluesy, sounding so different from his work with some of the other artists mentioned above, often clean-toned, sometimes a touch rawer but barely.

Parker's playing is less about the pyrotechnics than Charlie Hunter with TJ Kirk, it is more direct and compelling than Adam Levy, a notch more adventurous than the Danish Uffe Steen, but you get the gist : jazz guitar at its best and most compelling.

Even if the guitar is obviously the most in the frontline, the drumming and bass-playing deserve as much credit. With rare exceptions, Amendola keeps his role as functional, with ongoing percussive adornments of the groove, if not with electronics, as on "Cascade". Listen to his drumming in support of Shiffletts intro for "Blues For Istanbul": Amendola plays almost exactly the opposite of what you would expect : fast, energetic and subtle for an intrinsically slow blues : amazingly refreshing until you hear the soft tones of Parker's guitar for a theme that is almost a standard before the album is released.

"Death By Flower" is harder, more rock-influenced, and it takes an inventive player like Parker to restrain from doing the obvious in his soloing. And it keeps getting better, for the sensitive title track, with some country influence - Frisell is not too far away here - but so contained and disciplined.

"Lima Bean" is a little more funky, and my favorite of the album, so bluesy and deeply felt too. "The Knife" brings us again in a more rock environment, with a dirtier guitar sound and more emphatic beats. The last piece, "Lullaby For Sascha" starts with weird electronics, slowly developing into the sweet melody you would expect from the title.

This is absolutely great music, so much fun, well performed. Not free jazz, but not to be missed.