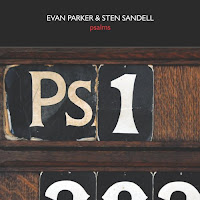 An unusual album with unusual instrumentation : Evan Parker plays sax, and Sten Sandell plays church organ, recorded at St. Peter's Church in Whitstable, the place where Parker also recorded a solo album earlier this year, and I am surprised to find that I did not review it.

Anyway, at hearing the first interaction on the album, I was a little bit sceptic about the potential it might offer, and in truth, you need some adjusting to the sound of the organ and especially the way it's being played by Sandell. Yes, it still has the solemn gravitas you can expect, but in his hands it turns into a whole symphony of sounds, at the same time acting nervously and flute-like with the sax, and offering other sounds, drones or violin quartet dissonance or whatever you may think is captured in the big instrument's inner structure, and many more that you wouldn't suspect and that were created here for the first time.

Parker is his usual self, making his sax moan in multiphonics, chatter like birds, shout furiously and indeed also much more. The playing is totally not psalm-like. there is madness here, ferocious anger, unresolved tension, yet when pieces evolve, the music becomes first more playful (as on the short "Psalm 3"),

The absolute masterpiece is "Psalm 4", a slow and absolutely stunning dialogue, with Sandell - don't ask me how - kind of bending the tones coming out of the organ, starting quite dark and gloomy yet gradually evolving into more fragile and vulnerable interaction with both instruments meeting in the high tones of their instruments, with sustained low tones coming out of the organ too. "Psalm 5" ends with endless menace and agony, with Parker's circular breathing and shifting intensity, yet ending hesitantly and almost timid, in stark contrast with aggressive violence of the last psalm, shouts included, and its more direct, in-you-face approach.

The psalms improvised on this album are far from the kind of hymns or chants you would expect towards a deity, but they are transformed into an agonizing dialogue of conflict, discordance and struggle. And this attitude, this level of character and tension is what makes this music great to listen to.


Listen to another performance by both musicians (at Konfrontationen, Nickelsdorf, Austria, 2010)