Several years ago, I was struck by the innovative beauty of "Memorize The Sky", a trio album with Matt Bauder on sax, and he has figured on some of the best albums of the last years, by Harris Eisenstadt, The Exploding Star Orchestra, Taylor Ho Bynum, Adam Lane. This year, he released two albums as a leader, and I must say, both albums bring us into yet again totally different musical univserses. 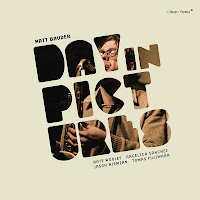 On "Day In Pictures", Bauder brings his own music, one that sounds at first hearing like mainstream jazz of the fifties, both in terms of the themes, the sounds of the instruments, the harmonics, the rhythms.

So, quite accessible music, pleasant to the ear, with excellent playing by musicians Bauder's been playing with over the years : Angelica Sanchez on piano, Jason Ajemian on bass, Nate Wooley on trumpet, and Tomas Fujiwara on drums. The fun thing is that these guys play this music, with a kind of reverence of their masters, the giants on whose shoulders they stand, but it would be boring if it stayed like that. As easily, they deconstruct the music, let go of explicit structures, by adding complexities or even by totally abandoning the foundations they're standing on, taking the music out into more stratospheric regions, or using sounds that would have been unthinkable some decades ago.

The end result is not boundary-shifting, but the playing is so good and full of joy that it is really easy to recommend. Highly enjoyable. 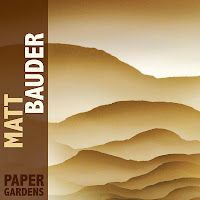 "Paper Gardens" is totally different, Bauder is accompanied by Matana Roberts on reeds, Loren Dempster on cello and Reuben Radding on bass. The album's concept is inspired by paper art work made by children, which made Bauder compose and structure these eleven pieces. The end result is one of calm, meditative music almost, quite fragile and vulnerable, yet interesting for their sonoric quality and compositional skills. The latter has more to do with the arranging of the instruments, the organisation of the rhythms, the layering of the sounds than with the composition of themes per se. The notes are stretched and often act in unison, with cello and bass being played more arco than pizzi, but with the occasional eruption of excited dissonance.

The music has a soothing and intense quality. The tracks vary in length between seventeen seconds to fifteen minutes, yet all fit perfectly within the minimalist universe. It's a nice achievement, but I preferred the even more visionary work of "Memorise The Sky".

Bauder is a fantastic sax-player with a broad background and lots of ideas and idioms he feel comfortable in. You can welcome and appreciate his musical search. It's the foundation to further developed his own voice in some years, which might make him truly great.


Watch the Matt Bauder Quintet (different band) on Youtube, with Cleopatra (a great tune reminiscent of Ethopian Mulatu Astatqe, and which opens "Day In Pictures")