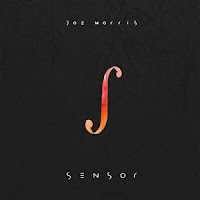 I love solo bass albums, because of the sound. Nothing like vinyl on a good turntable with good amp and good speakers to listen to the depth and the warmth of a bass sound, even if, as on this record, the playing is adventurous.

Joe Morris is primarily known as a guitar player, but he's equally good on bass, with a somewhat different approach. He started playing double bass in the year 2000 only, and this album celebrates his 10th anniversary on the instrument.

Other Joe Morris albums on which he plays bass as the leader are "Wildlife", "High Definition",  or as co-leader with "The Flow" or "The Story Of Mankind", and playing bass with other artists such as Jim Hobbs, Steve Lantner, Petr Cancura, Rob Brown and Whit Dickey. His solo guitar albums are "No Vertigo" and "Singularity".

His approach on bass is one of a nervous calm, carefully developing his lyricism, yet with an ongoing forward pulse. In contrast to his guitar-playing, his bass technique as demonstrated here is straight-forward, but excellent, with the expressive power increasing when he picks up his bow.

Despite his relatively young familiarity with the instrument, he can of course build on many decades as an improviser, and that's clear from every piece: even if they're all callled "Sensor", he sticks to one musical concept, that is then further expanded upon, shifting it, pushing it, changing it, approaching it from another angle, but never straying too far from the core idea that makes the piece. The pieces also alternate between bowed and plucked, but without switching in the middle of the track, which makes this also a very balanced and disciplined exercise: side A : pizzi, arco, pizzi - side B : arco, pizzi, pizzi, arco.

"Sensor I" still starts with increasing agitated intensity, but - deliberate or not - the music becomes slower as the pieces unfold, with "Sensor VI" reaching a kind of vulnerable hesitation, only to reach the great slow intimate and beautiful "Sensor VII".

Even though I am a fan of solo bass albums, I can still highly recommend it, also to non-bass players.

Listen to "Sensor I" and "Sensor III"