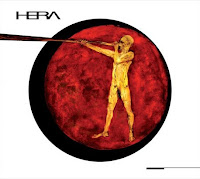 Whether with "The Light", with "Afekty", or earlier this year with "The Passion", Polish clarinetist Wacław Zimpel has been refining his musical vision, one that is built around composed /mprovised and structured music, full of drama and story-telling, yet always looking at new ways to increase the expressivity of the sound and the interplay, as means to go deeper and deeper into the heart of music.

On "Hera", we find Zimpel back in the company of Paweł Posteremczak on soprano and tenor saxophones, Ksawery Wójciński on double bass, and Paweł Szpura on drums.

On "The Passion", the life of Jesus was the inspiration for the music, now the band goes somewhat earlier in mythology with the Greek goddess Hera, sister and wife of Zeus, goddess of marriage and birth, virgin and mother, jealous and cruelly vindictive, she was worshipped in the whole of the ancient mediterranean, including Sicily, where her cult flourished. The tracks on the album refer to the cities in Sicily where temples or famous mosaics depict her : "Monreale", "Palermo", "Cefalu", "Segesta".

The last track is the traditional "Sometimes I Feel Like A Motherless Child" - the title is of course not a coincidence in relation to Hera the goddess, nor as a reference and tribute to Joe McPhee, yet the piece fits also musically as the great finale.

The music shifts between postboppish lyricism and expansiveness - even without a piano, Jarrett comes to mind once in a while - on the one hand, an  the freedom and expressive power of free jazz on the other. The clarinet and sax wail, howl, scream, sing, jubilate, weep, cry, lament, full of anguish and anger and horror and misery : this band delves into emotional delivery without restraint, while keeping an incredibly controlled notion on how the music as a whole evolves in the ears and heart of the listener. And I mention the horns, but obviously the bass - arco and plucked - and the drums - thundering or subtle as Paul Motian - participate actively in moving the music from dark gloomy moments to pure exaltation and back to utter despair. The sonic explorations led by the arco bass on "Segesta" are a good example.

Like the other albums, "Hera" unrolls like a suite, with the five tracks perfectly integrated for a long and majestic journey which will leave very few listeners indifferent or unmoved. And while touching you for its sensitivity, you will also be swept away by the mythical grandeur of the totality.