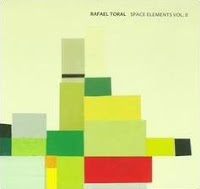 Rafael Toral's "Space Elements Vol. II" has been lying here for a while. I've listened to it often, wondering whether it would fit the profile of this blog, which is - I must admit - sometimes straying from its free jazz path, but what the heck, good music requires breaking rules and if it was all the same where would we be?

My major shift in deciding to do it is the re-issue of Toral's "Violence Of Discovery", an electronic album that puts his new album in a totally different perspective. He calls his own style "post free-jazz electronic music". He moved away from the focus on the instrument and the sound experiment per se, back to the musician with his/her emotions and immediacy of performance.

This album is the fourth actually in his "space program" sequence that started with "Space", and was followed by "Space Solo" and  "Space Elements Vol. I".

The music is unlike anything you've heard before. Musicians add sounds left and right, around open space, yet with a cautious intimacy of non-interference and timid reconnoitering. No melodies, no phrases, no rhythms, just minimalist touches on silence like spatters of paint on a white canvas.

The quality and the number of musicians assisting on the project is beyond expectation if you listen to the album: Evan Parker on soprano sax, Manuel Mota on guitar, Afonso Simões on drums, Stefano Tedesco on vibraphone, João Paulo Feliciano on Rhodes piano, and Ruben Costa on digital synthesizer, Sei Miguel on trumpet, César Burago on percussion, Fala Mariam on trombone, and Rute Praça on cello. Toral himself is the tone sculpture in all of this, using such instruments as Coil Spring, Glove controllers, Modular synthesizer, Modified MT-10 amplifier (a.k.a. Bender), Electrode Oscillator, Echo-feed, Modified MS-2 amplifier. But the real "blips and beeps" are limited to only the last-but-one track, without really destabilising the exceptional musical coherence of the eight pieces.

The sound environments are exceptionally fragile and almost human or at moments animal-like, interactions of living creatures, slowly expressing themselves, gently, or like thoughts welling up during a zen-like meditation. It is uncanny, bizarre but quite successful in its result.

It is fresh, open, extreme yet very welcoming. 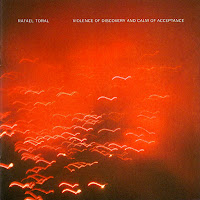 "Violence Of Discovery" is of a different breed, and that makes the evolution so interesting. This album with the magnificent title took seven years to complete, according to the musician, and contains layers and layers of electronics creating slowly developing soundscapes, sometimes barely audible.

The music's essential calm has at the same time a haunting quality, or to some it could be nerve-wracking. It is supposed to be a real must for drone fans, but it is beyond my reference points for further evaluating it.


All four albums in Toral's space program can be listened to and downloaded from eMusic.