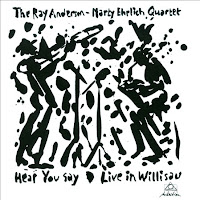 Take four stellar musicians, put them in front of a great and enthusiastic audience, and you have won half the game. The quartet is Ray Anderson on trombone, Marty Ehrlich on clarinet, alto and soprano saxes, Brad Jones on bass, and Matt Wilson on drums.

The album opens with a tribute to the late Leroy Jenkins, and a notch more "mainstream" than the great violinist, but bringing a great and varied mixture of traditional jazz references with quite free form improvisations and changes in intensity. The audience is huge, not like the dozen people we're used to at our free jazz concerts, applauding after each solo, encouraging the musicians to do more. And that's what they do : have fun, demonstrate their skills, their mad dialogues, their rapid-fire echoes, moving from playfulness to sensitivity.

"Hot Crab Pot" is boppish, but with sudden rhythm changes, fun again. "My Wish" a short ballad in the mood of the late 50s. But then "The Lion's Tanz" is more free, with the two horns playing around with sonic and rhythmic inventiveness, spurring each other on, until half-way a crazy speed chase theme emerges, that folds again into more patternless playing, only to return a few times more. The audience is wild, the band has fun.

"The Git Go" is nervous, uptempo and with out-there soloing, with "Alligatory Rhumba" going back to more Elingtonian themes, dance-hall melodies and swing band fun. The last track is my favorite, with a great funky rhythm driven by bass and drum, who get a little more out of their functional support of the horns on this track. Great fun.

The playing is so excellent and the overall atmosphere so joyful that it is great listening to. Nothing new, no real artistic ambitions, but entertainment of the highest order. Any jazz fan will like this.