Here are some great and noteworthy solo sax albums, not an easy genre, difficult to play and maintain attention, hypnotic if played well. Technique is one thing : the basis. What you do with it is what counts. These sax-players have understood this very well, despite the huge differences between them in terms of style and musical vision. 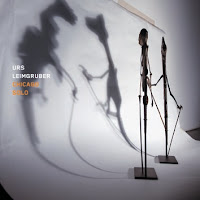 When listening to German Urs Leimgruber's playing on this album, I was wondering why it was possible that in physics or biology when one has gone beyond all existing theories and found new workable hypotheses, the latter replaces everything that came before for the entire profession, whereas in music, the new possibilities never replace the existing ones, but rather offer a quite new dimension to listening.

At the same time I thought Leimgruber's music ressembled quantum physics, in the way that he goes beyond tones, to dig into the deeper stuff that is either invisible or inaudible usually, yet because of the intensity of his playing the quarks fly in various direction at superspeed, bouncing against each other and creating new stuff. For all clarity : I know as much about physics as about the movies of Sylvester Stallone, i.e. nothing.

But that's how this music comes across, actually Leimgruber brings us beyond music.It has a kind of deep and essential fragility and sensitivity: each note is played with such caution, but equally with an incredible intrinsic power that makes it possible to move in any direction.

Sometimes I get the question : "Can this not only be appreciated by sax-players?". My answer is clear "This is a nightmare for sax-players to listen to, because it shows them what is possible with the instrument that they were not even aware of".

Non-sax-players can listen to this and enjoy these sounds -  hypnotic, fierce, spontaneous, volatile, scattering, bouncing, choral, multiphonic, trance-inducing - just for what they are : great sounds in space.

Interestingly enough, I now read the liner notes and see that Oliver Schwerdt compares Leimgruber's music to Galileo and Copernicus : "his portrayal of the soprano as a telescope suggests the consciousness of a musician who, freeing tones from the gravitational field of the earth, sends them soaring into the depths of space". Allright, astrophysics instead of quantum physics, I was in the same regions, just wrong by a factor of 10³³³³³³³³. 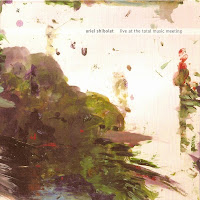 Israeli saxophonist Ariel Shibolet does not match Leimgruber's universe of immense possibilities, but he offers us the human variant, equally uncompromising, yet equally rewarding. Shibolet uses incredible use of circular breathing and multiphonics, doing stuff that is hard to fathom at times, but every note is a great cry for release, one of perpetual pain and anguish trying to be freed, especially in the long first piece, but as the second piece evolves, his tone becomes warmer, reaching the middle range of his instruments, and becoming more a shamanistic incantation, including keeping the same tone for minutes. The third piece starts - surprisingly enough - with something ressembling a phrase, but soon enough we're back into trance-mode, with long bouts of circular breathing, pauzes with little more than whispers or sudden blasts.

It is all pretty intense, but a great listen for those of you with open ears, as was the appreciative audience, at that festival in Berlin in 2007. 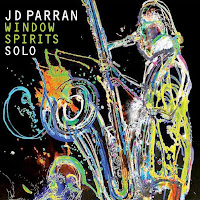 With JD Parran, we're moving out of Europe and into the US, and the difference can be heard: we move from free improv to free jazz. Parran has been playing for several decades with musicians such as Bill Dixon, Anthony Braxton, but also Stevie Wonder and The Band. "Window Spirits" starts with flute-playing, like an incantation for the "window spirits", whatever those are, with a rhythmic pulse and soaring sounds.

His first bass sax sounds on the second track start deep and low from the core of the body, like a growl out of which all the other notes will follow. And it is not only the difference between soprano and the deep tones of the bass sax that mark the difference with the previous albums, it's all about soul and heart, with recognizable little phrases arising once in a while, containing elements from gospel and blues.

The release celebrates Parran's 50th anniversary of playing music. As Parran describes it himself : "This recorded solo performance, Window Spirits, manifests memories, dreams and feelings expressed in my life through music. Here, on this plain called life, we can experience existence on level ground with the ancestors."

The album is also quite varied in tone and instrumentation, switching to clarinet and flutes once in a while, ending with a tribute to Glenn Spearman and especially his uncle Ohara who taught JD Parran. 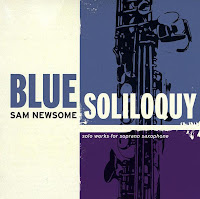 Sam Newsome traded his tenor in the mid-90s to develop his own sound and voice on the soprano, and he does so brilliantly. Despite the relative openness of his music, it is drenched in jazz history, starting with bluesman "Robert Johnson" on the first track, with references throughout, to Monk, to Lacy, to other peoples of the world, in Africa and Asia.

I already spoke quite positively about Newsome's previous album, a tribute to Monk, and I must say that this album manages to avoid some of the cerebral approach of the previous one, even if it remains quite programmatic. Newsome's playing is fabulous, and especially the soaring lyricism of "Blue Mongolia" and the repetitive phrasing with circular breathing on "Blue Bejing" are absolutely stunning. It is melodious, joyful, uplifting and with a clarity of sound that is quite exceptional.

Yet again, it is all too much focused on the instrument itself, which might be a strange comment to give on a solo performance, but yes, it is still more about the technique than about the music itself. He has that unique tone, and at moments he touches upon something which could become his own musical vision too, especially when his jazz becomes classical music or vice-versa, as on the interesting merger between Monk and Bach on the last piece. Let's hope he can carve that out and expand it.