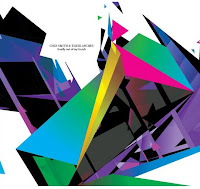 In the closing song of Finally Out of My Hands, there is an eight-bit electronic sound is used that is achingly familiar. The tiny melody is woven into the song so craftily that it takes me a little while to place it. It has been a long time, but it stirs old memories of afternoons spent on an Nintendo game where you jump on turtles and pop gold coins from bricks.

Nostalgia inducing sounds aside, this excellent new recording is quite fresh and original, starting with the opening moments of Anxiety Disorder, where guitarist Mary Halvorson picks out a sinewy Middle Eastern sounding theme over a lush reedy rhythm section consisting of Andrea Parkin’s accordion intertwining with Tony Malaby’s saxophone. The sax soon picks up the melody, reinforcing the guitar line, rapidly building to a rather dramatic chorus. I would consider this the anxiety part, as suggested by the title, because soon we enter the disorder. Smith’s percussion keeps steady under the chaos, drops out, then slowly, a guitar solo emerges, angular and unpredictable, soon joined by the other players. The theme re-emerges and once again we are treated again to that rather lush rhythmic backdrop.

The next song, Finally Out of My Hands, like it’s predecessor, starts out with a thick unexpected melody that leads to a hard rock plod by the rhythm. Smith’s percussion will drive the songs, but more often, he is interacting with all the players, providing more of a conversation, a collective telling of a tale, rather than traditionally structured songs. But, they are songs, melodic and captivating, structured but open and confident. Just when you think you have the tune figured out, ready for a repeat or a solo, expectations are dashed; however, the free excursions are not without reason and work back into the tune before they become frustrating.

I find the recording something I can come back to repeatedly, hearing -- or imagining -- new sounds and connections each time. The opening tune, Anxiety Disorder, also appears Calling all Portraits (2008) from Smith, Halvorson, Pavone, with Devin Hoff from Nel’s Cline Singer’s. However, the versions are quite distinct. Smith’s use of the sax and accordion as rhythm section instruments give Finally Out of Hands a satisfying, and unique, density. Halvorson’s guitar skitters and dips, adding accents and colors, providing compelling leads, support and fractured solos. Sixteen bars for jail is probably the most driving song in the collection. Smith’s percussion is almost a counter melody to the saxophone at the start of the tune, under which the collective is providing a slow moving harmonic progression. The tune builds in intensity as Malaby performs a skronking solo that leads into a group improv, with the instruments all poking in and out of the mayhem. Finally, the listener is delivered into One long minute, which functions essentially as a ballad. Overall, this recording is one of shifting textures, with interesting melodies weaving in and out of collective free improvisation and highly structured moments.

All of these musicians seem quite busy, Ches Smith’s profile lists something like a dozen current projects. He is also a regular member of Halvorson’s groups, which recently released the excellent, and entirely different sounding, Saturn Sings. Hopefully this is a group that records again, as this short recording does not overstay its welcome.

The score is not the most important thing. The reviewer becomes dependant on the previously granted "stars" and might underate the following album. And it is impossible to do that when you have 6-7 contributors. All of them might give 5 stars to the albums reviewed by them or none if there is no clear criteria for the rating.

I agree with "Anonymous" (second version). We still haven't figured out how to have comparable ratings.

Welcome and well done, Paul! You did very well with your first review!

I'm not sure what to do about the stars going forward. I found that a great way to build my free jazz collection was to buy as many of the 5 star cds as possible. But with differing standards, this might not work as well.

There should be a way to signal that an album is absolutely essential. But that rating should be used very sparingly. In the Penguin Jazz Guide, they have a crown, which they give to a tiny portion of albums, less than 1%. Stef gave 5 stars for a higher percentage than that, but still a reasonable number.

Perhaps the crown can be given if several reviewers agree it is deserving.

We'll need to discuss this further going forward. If we can agree on common parameters, we can get it done.