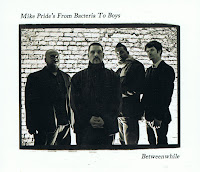 To pin down Mike Pride on his excursions into doom jazz (with Jamie Saft), exhausting marathon sessions (with Jon Irabagon) or outsider music (on his own) wouldn’t do him justice, as the composing drummer is also capable of providing a subtle foundation in more traditional contexts. With Jason Stein’s Locksmith Isidore trio, he establishes himself as an emphatic colleague, and also on “Betweenwhile”, his second album with the From Bacteria To Boys quartet, the finesse is much more dominant than the power play.

On these ten compositions, Peter Bitenc (bass), Alexis Marcelo (piano), Pride (who wrote nine of the compositions) and Darius Jones (alto saxophone) manage to touch upon classic jazz without diluting their remarkable approach. This is is an album of subversion, albeit subtler than you might have anticipated. Opener “Kancamagus” suggests you’re listening to a traditional piano trio, just as “Rose” and “Inbetweenwhile” have hardbop written all over them. However, for each of these seemingly conventional tracks, there’s one that’s equally puzzling, or even unsettling in its refusal to play by the rules.

“Reese Witherspoon”, like many other tracks, is supposed to be influenced by R&B star R. Kelly’s legacy, which is reflected in an original rhythmic approach and misleading conception of structure. The repetitions of “It Doesn’t Stop” are arresting in their stubbornness, but soon make way for a muscular drive full of stumbling bursts and fascinating interplay. It’s also interesting to hear Jones in a completely different role than on his solo album. This isn’t about roots and wailing with gospel-fueled fervor, but about a sleek and angular approach and slithering solos. The album’s centerpiece “Bole: The Mouth of What?” was inspired by the songs of the carnies at a fair Pride visited a few years ago. Starting with an ominous piano section, the song soon develops a remarkable tension between familiarity and alienation.

The album maintains this merger of tradition and experiment until the end. “Betweenwhile” is perhaps less raw than many might have expected, but Pride’s grasp of rhythmical dynamics and challenging interplay is at least as interesting. This record has creativity and vision on full display, and that might take Pride in any direction he wishes to veer into.

Pride’s self-made video for “Bole: The Mouth of What?”