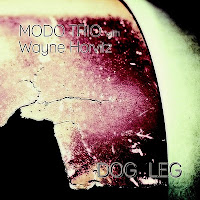 I must admit that is has taken me a little while for me to get into this album. I liked the Edmonton, Canada based trio's first recording, "Uninvited" with keyboardist Jamie Saft and had been looking forward to hearing their work with Wayne Horvitz. The core of this somewhat unusual combo is made up of Craig Brenan on trombone, Jeff Johnson on acoustic and electric bass and Bill George on drums, with Wayne Horvitz appearing on both piano and keyboards. I listened several times, each time developing a stronger taste for the songs.

Dog Leg starts out with what I think can be best described as a towering dirge, "Homemade Paneer" slowly builds in urgency and menace at an unhurried pace. Horvitz is front and center on keyboards on this one, adding atmosphere and choice melodic fragments. The introduction is majestic, and next up, "Dog Leg", introduces an electronically affected trombone playing a frantic melody. Once again the sound is big, and when Horvitz enters with a distrorted keyboard tone, it begins to feel like early Weather Report emerging from a dank swamp. With the octave dividing effect on the horn and the strong rhythmic lock between the bass and drums, this faster paced excursion is an excellent example of the the band's tight interplay.

By the time we reach "Kingdom", we are introduced to a more atmospheric and dreamier state of the trio/quartet. At times, it feels like you are being ferried through a damp shadowy cavern, the trombone soaring, Horvitz adding splashes of color and nuance, while the rhythm section provides gravitas and groove. "Improv 6" shows the groups free jazz instincts. Brenan's frenetic melody on trombone is energetically answered by Horvitz while the bass and percussion provide a solid, yet quirky, foundation. Johnson's bass takes center stage on the uptempo groove "Xenophobe", while Brenan provides another charged improvisation. "Perpetuity" is a ballad with bluesy undertones, the trombone forlorn and rhythm appropriately laid back.

I find myself latching onto different aspects during the first half of the album during each listen; the energy is dark, the tones are earthy and deep, and Horvitz's keyboards add some real metallic energy. Fans of Horvitz, as well as fans of groove based improvisors like Medeski, Martin & Wood, could certainly enjoy this outing. However, by the second half of the album, while the tunes are still as interesting and organic, I find my ears getting a bit tired. I do not think that is bad either -- there is an enjoyable, somewhat oxymoronic, lugubriousness to "Dog Leg" that could perhaps be best compared to a piece of rich and moist dessert, so sumptuous and satisfying with each bite that you need to ingest slowly.

I really like your blog and i really appreciate the excellent quality content you are posting here for free for your online readers. thanks peace sandro