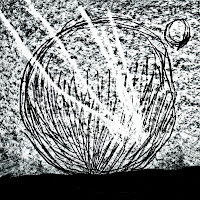 Popping in a CD that you have never ever heard about is a fairly adventurous deal. Especially when the afore said CD purportedly belongs the free jazz genre it is almost a feeling of exhilaration – one might either end running with their hands over their ears or be swept off their feet. My experience with Zero Centigrade was rather mixed – I definitely did not run but my brows were twitched in both incredulity and perplexity.

Featuring Tonino Taiuti playing (or should I say wrenching, twisting, creaking or in short man-handling) the guitar and Vincenzo Del Luce doing similar things to a trumpet, I’m Not Like You, in my opinion, resides on the fringes of free jazz. Forty minutes of a wild ride is what is in store for all those daring ones who sit down to take a listen. For instance, I could barely make out the trumpet for the sounds that Del Luce manages to get out are, to say the least, so ‘out-there’. The guitar though is fairly on the easier-to-decrypt side but mind you, this is no melodic acoustic guitar on display here – it squeals and twitches and wails. The album does feature (rarely) some parts where the instruments are retained to provide their natural timbre (in the longest and stand-out track, In the Field) but these parts quickly disintegrate into the usual plunking and clunking escapades. What struck me as most riveting are the moods that these players manage to evoke – there are moments of tension when both the players are barely playing to periods of total atonality and improvisation – it is almost an eldritch feeling one gets while plying through the record (the opener, Swimming in Black Water, sets the stage perfectly for what is to come).

The sounds reminded me of a live DVD that I had seen of Fred Firth where the guitar was practically reintroduced in a new avatar but Taiuti stretches even these limits. At the end of it, it is quite difficult to put a finger on where this album stands for me – I, for one, at the end, did feel rewarded yet teased and taunted. I have to recommend this with caution to the general free jazz listeners but with excitement to the more adventurous of the free jazz aficionados – after all isn’t that the purpose of this whole genre?!

Go head and indulge Joe ! No temptations should be left unturned :)

Thanks for the encouraging words :)

Well as for turning stones, that depends on my bank balance ;-)

From the first paragraph: I have felt that way many times. Specifically, I remember when I first heard Miles Davis' "Milestones" and "Kind of Blue". Thanks for the reviews.