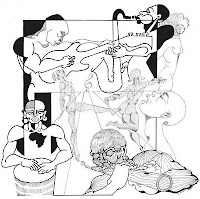 If you want to hear the sound of the seventies, don't miss this one : it is a great mixture of free playing on a solid rhythmic and often funky base.

I have listened to it for a couple of days and the music is absolutely hypnotic, trance-inducing and mesmerizing. Byard Lancaster leads the band on alto, accompanied by Khan Jamal on vibes, Monnette Sudler on guitar, Billy Mills on electric bass, Rashid Salim on conga, Omar Hill on percussion and Dwight James on drums.

The music is as much indebted to John Coltrane's soaring expansiveness as to the Santana band of that period, with endless percussion driven exuberance, with the horn soloing the whole time, full of lyricism, emotional outbursts and spritual power, and with the same collective enthusiasm as the Human Arts Ensemble at that time : the world and the mind were opening up, needed opening up, and the music wanted to be part of that.