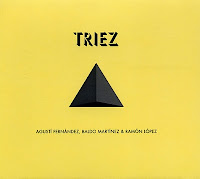 No doubt Spain's number one piano player in jazz is Agustí Fernández, whose playing spans the history of music, from classical over traditional jazz to avant-garde. Just to show the pianist's breadth, I confront this very accessible and almost Bill Evanesque album with Trio Local, reviewed below, bringing music totally out of the comfort zone of every listener, yet equally coherent as a trio performance.

This album's title is a kind of joke, referring to the word "trio", but also the suffixes of the three musicians' names, ending with "ez", originally meaning "son of" in Spanish. At the same time, it also means that they are "sons of the trio".

What you get on this album is Bill Evans, some Paul Bley, not much of Cecil Taylor. But then again, it's the trio's music, with broad references to music outside jazz : Spanish music, African music, Indian music.

And of course, you also get a great cover of "Lonely Woman", Ornette Coleman's musical gem and gift to humanity, and not Fernández's first try at it, but equally impressive.

The music is improvised around clear themes and structures, often with great unison moments, and it is all about the joy of making music (and there is lots of fun to be heard), but also of joint introspection and meditation. And the remarkable thing is that it all quite fits well together. 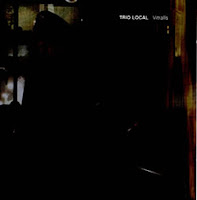 The more hermetic Vitralls brings us Agustí Fernández on piano, Joan Saura on electronics and Liba Villavecchia on soprano and tenor sax. The album brings one long piece of forty-eight minutes of sound textures built around silence, lots of silence, and dark as the cover suggests. The title means "stained glass", as the kind that you see in ancient cathedrals, with barely any light passing through the centuries of darkened glass, reinforcing the uncanny atmosphere of mysticism rather than enlightening the building's visitors. The three musicians create an incredible level of tension and interaction with a total lack of lyricism, but more expressive than if it had, but for the end of the long live improvisation, when the notes of the sax seem to find a level of continuity and flow, but the electronics drag this sign of hope down into the deeper and darker corners with no light has a chance to survive.

And Fernández in all this? He lets you hear the sounds of the piano that were rarely heard: as percussion instrument, as screeching background clatter, as thunder without lightning.