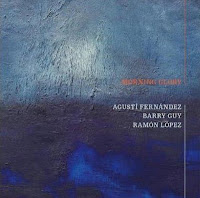 At its high points, Morning Glory is no less a musical achievement than the greatest of the great piano trios in our beloved music. Two that come to mind are the The Lowell Davidison Trio and Bill Evan's Sunday at the Village Vanguard. At their best Agusti Fernández, Barry Guy and Ramón López continue the larger, transcendent conversation begun by the players on those canonical recordings and could, for approximation reasons, be likened to a combination of the two.

Though few and far between, the low points on Morning Glory, most of which are on the live bonus CD, provoke the same shudder as the triumphant positivism of Bruce Hornsby. If you've ever come across a clump of brown sugar in your morning muffin that didn't get totally blended in, you know what I mean--hardly a disaster, but enough of an issue to keep Morning Glory from the full five stars. Such are the wages of tonality and song. Fernandez traffics in both.

Though fluent in a harmonic tartness that reminds me an awful lot of Lowell Davidson (compare Davidson's Ad Hoc with Aurora on Disc two) Fernández tends to disarm rather than agitate — that's where the comparison to Davidson falls short and Bill Evans comes in. A “Latin” rather than “jazz” feel is Fernández's gestalt, abounding with earnest, melodic sincerity that confounds much in the same way paintings by Titan or Raphael don't connect as much as they let you know what you don't know (cf. Oberg's accounting office).

In and of themselves, Fernández's themes and flourishes steer Morning Glory dangerously close to Windham Hill territory, let alone ECM. Fortunately, Fernandez is never given that chance with the ever vigilant Guy and completely capable López on the case.

As with all the Maya releases (and I have most of them) the embodied energy, care to detail and depth of musical statement is so evident, so resounding that I can't help but seize up when it comes to review them. Guy's contributions to music and the bass are so deep, it's hard not to sound like Fred Willard's character in Best in Show when talking about them.

Can Barry Guy make an ugly inappropriate sound on the bass or does audible genius squirt out every time he touches the instrument? Even if he has never once listened to Scott Lafaro's with Bill Evans (or Eddie Gomez's with Davidson), Guy continues to write the history of the bass in music in real time, in the same aesthetic trajectory and with the same remarkable fervor. We all know that with a lesser pianist Sunday at the Village Vanguard would universally be understood as a “bass record.” The same is true for Morning Glory.

There is every reason to believe that Guy's generation of bassists (I'm thinking particularly of Alan Silva and William Parker) not only brought the age of bassist-as-quarter note marker to an end, but also thoroughly exhausted their own conception of the bass. It's hard to think of a facet of the instrument that Guy himself hasn't explored, asymilated and made his own. (Add to that Silva and Parker and ask yourself what's left?)

In Guy's case, his musical dominion extends back to baroque music. Guy's bass solo at the beginning of Don Miguel draws liberally from a 400-year-old harmonic well, without sounding like the intro to Roundabout. And yet, for as inventive as his reading is of that tradition, it's Guy the improviser we salute and must unanimously acknowledge as a fully realized living master of the Bass. This recording is but one reason.

While López never eclipses Milford Graves' work on The Lowell Davidson trio, López never makes me cringe either—something drummers are predisposed to do. While Lopez never eclipses Guy or Fernández
either, we have to thank him for that, so let us shower him with ample points for the assists and support. Never once does he stumble or fall behind. His ease with quiet on An Anonymous Soul endeared me to
him for good. It's not like López is faceless in and amongst it all, he's just not writ quite as large.

Here's hoping there is at least as much economic as there is aesthetic incentive for this group to continue. If there is, we'll all be the richer.

I've had this since before Xmas and it's one of ths standout discs of recent months for me. The sheer vitality in both the live and studio sides is astonishing, the interplay is amazing. There's a coiled restraint to some of the playing (certainly compared to Guy/Fernandez duo of 2010) that adds a deilightful tension to the more melodic episodes.
I have to say that Windham Hill has never entered my mind when listening to this and I hope it never does!

Two Agusti Fernandez reviews in one day. Great!
"Some other place" is a fantastic CD, and I wondered while listening what percussion would add to the mix.

This sounds like a good excuse to find out.