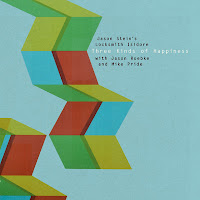 I have a soft spot for the bass clarinet. The quirky look of the instrument certainly has something to do with that. Also the fact that it has rather few practitioners and the realisation that some of them (like Rudi Mahall and Louis Sclavis) do tremendous things with it. Of course, there’s also the peculiar, bleating sound, especially in the lower register. As it happens, the latter is almost absent on this third album by Jason Stein’s trio, on which the leader does so much more than stressing the instrument’s extremes.

Like its predecessor “Three Less Than Between” (Clean Feed, 2009), it marks quite a departure from the debut “A Calculus Of Loss” (2008), on which Stein and drummer Mike Pride were joined by cello player Kevin Davis. The album continues the more traditional approach of the second album (on which bass player Jason Roebke replaced Davis), while sounding even more ‘traditional’. There’s not much aggression, dissonance and bleating going on here, while Stein’s lighter approach stresses the melodic qualities of the songs. Several of these have a carefree, almost breezy quality that makes the album a joy to listen to, without ever succumbing to blandness or predictability. And Stein sounds, more than ever, like a regular clarinet player.

Opener “Crayons For Crammy” immediately makes its case, with a catchy melody and appropriately subtle backing by Roebke and Pride. It is music with an original yet natural flow, creativity in abundance and a good-natured atmosphere. The album also has its thornier moments, like “Arch And Shipp” (starting off with unpredictable probing by the rhythm section and a venture into free jazz) and “Man Or Ray” (sudden starts & stops and an almost cartoonish atmosphere). These pieces sometimes hint at more radical terrain (just like “Cash, Couch & Camper”), but usually end up finding a refreshing balance between the tradition and the experiment.

To prove that the trio is still capable of setting the house on fire, the album also includes a live version of “Miss Izzy” (from the previous album), which has a tougher, more muscular style that ends the album on a forceful note. Make no mistake: these guys have the chops to move into any direction they wish to explore, but the willingness to include a more conventional basis and turn it into something exciting and entirely refreshing, as they see fit, makes it a compelling delight from start to finish and an album that only benefits from repeated listenings. If it were vinyl, I’d need a second copy in the meantime. Jovial interplay, gentlemanly adventure, an embarrassment of riches!

* The trio is currently touring in Europe at this very moment. Check out Stein’s website for the dates. For the Belgians out there: this Saturday, the band will play at Kunstencentrum BELGIE (Hasselt), along with Cinc (Vandermark/Lytton/Wachsmann).

Jason Stein was on The Jazz Session recently discussing this album. Here's the link:

thanks, I'll check it out!

looks like an interesting album, thanks for the info

I notice that Jason is on tour here in Europe. Unfortunately I won't be able to make any of these shows, but if you're reading this blog in Europe, who knows ...... check him out :

All comment is good post and also your Blog is also compulsory for knowledge of locksmiths. Locksmith st-kilda

A locksmith can be very helpful to you if you ever get caught up in a locked out situation. Whether its your car or your home, a good locksmith can easily help you with all of your lock repairs and security essentials. Although, it is always best to check if a locksmith is licensed or not.