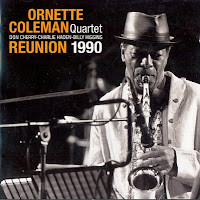 Toward the end of the book, Russell spells “it” out metaphorically with The “River Trip” Explanation of Jazz Improvisational Styles:

“Let's take a large river, like the Mississippi for example, and call it a tune. Now suppose the small towns along its shores are chords, and the larger towns are not only chords, but tonic stations as well. (Tonic stations are points in any chord-built composition to which two or more chords tend to resolve.)


Now let's say you're Coleman Hawkins and you're going to take a trip down he river on a steamer...this steamer is a local and will make stops at all the towns along the river....


Ornette Coleman also will make the trip down the river. His conveyance, Like Coltrane's, will be a rocket ship...Once his rocket ship jets off from St. Louis and soars into the chromatic sphere, it may not touch ground again until it has hit New Orleans”...He may remain aloft indefinitely, allowing his ideas to resolve themselves naturally.”

Now that Virgin Galactic is booking flights into space, Coleman doesn't sound so “space aged” any more. In fact, with Reunion 1990, The Ornette Coleman Quartet inherits the earth—and that was 21 years ago. Since 1990 Coleman released Tone Dialing and Sound Museum – Hidden Man and Three Women, two of my favorite recordings of all time by anyone, ever. The 90's were a good decade for Coleman and if you told me that the 90's was the future he began to remember on may 22nd, 1959 I'd believe you. The Shape of Jazz to Come. Coleman was right.

Reunion, as you may have read in Burning Ambulance (for one) isn't for the audiophile--just the listener. Of course everyone plays great--one long shimmering virtuoso cadenza of glimmering excellence from beginning to end. Haden is a real stand out. His solos are fully realized pieces unto themselves, employing the full sonic spectrum of the instrument to the point where he even whips out ol' John Hardy. Ornette, then 60 years old, sounds like a glorious ad-mixture of Fred “Curley” Neal  and Hakeem Olajuwon—elated and elastic yet strong and commanding. Same for Don Cherry and Billy Higgins who, on this outing, also fly at it full throttle, in a similar state of euphoria and grace. And why shouldn't they? They made it--in every sense of the term.

If you've ever cared about the music of Ornette Coleman (or Charley Haden, or Billy Higgins or Don Cherry) even a little, take out your credit card, buy this recording and pay that portion of your credit card bill. If you've never heard Ornette Coleman and you have come looking for a recommendation, you have found one. Start here and work backward.

Even with 11 months to go in the year, I hereby confidently place Reunion squarely within my 2011 top ten.

Sorry Stan, not sure we should pull out our credit cards for a semi-legit label, whose profits do not benefit Mr Coleman. Interesting (essential) though it may be, a bootleg is still a bootleg.

I really am asking.

Thank goodness there are the "legit" guys out there in white hats, doing right by the musician and the medium, making sure everyone gets paid their fair share.

Spare us the lame sarcasm. This is a legitimate issue in my book. I also don't see how the fact that major labels don't properly reimburse their artists justifies buying bootlegs, which presumably don't reimburse them at all.

To anonymous, anonymous and richard--

It seems to me like the system is (and has always been) broken from the top, right down to the bottom, and back up again.

As a musician, other musicians have always told me that total exploitation is simply the "cost of doing business" when someone else releases your music (and even that's not a guarantee.)

So while the notion that this recording is stolen intellectual property, released against the will and without the knowledge and/or permission of Ornette Coleman is a surprise (if it is true), it is hardly a shock.

If this is indeed an illegal boot leg, (and for all I know it probably is) then how can all the big distributors carry it?

It used to be you had to go to special non-chain, non-commercial record stores and buy these boot leg (albums!) with covers that were all white and labels that that had nothing to do with the content of the recording. I'm thinking of buying Frank Zappa bootlegs at Bleeker Bobs in the early 80's...records everyone knew were released against FZ's will--ergo all the stealth. The funny ending to that story of course is that FZ bootlegged the bootlegs and released them himself. Maybe Ornette should do the same--Reunion 1990 really is a great performance.

I know this is a naive question, but has it really gotten so bad and so bald that Amazon.com, HMV and CDUniverse can traffic in (what is alleged to be) illegal, stolen property without any repercussions?

Is Ornette really out there without any legal recourse to correct this situation? Is the exploitation of the artist's labor really that open and commonplace that some of the largest music distributors/retailers on earth can get in on the act without any fear of a lawsuit?

From the Anonymous' links, it would seem like (lately) the fuckery is usually conducted in a slightly more white collar fashion--you know, with accounting trickery, or plain old lying...

...rather than baldly selling stolen property all over the globe.

But, as mentioned, if that were the case--that Amazon.com, HMV, CDUniverse et.al. were complicit in the crime of selling stolen property--that wouldn't be a shock either; bigger corporations have been involved in far more heinous crimes.

The other possibility is (which, yet again, would not be a shock) is that in the eyes of the law, Reunion 1990 is a completely and totally legal release, Domino Jazz an entirely "legit" company AND AT THE SAME TIME Ornette Coleman is legally and legitimately not getting one cent from the sale of it.

What then? Curse the player or the game?

If anyone out there has any facts (with citations) on the legality of Reunion 1990 as a release or the legitimacy of Domino as record company, please to post them in the comments here. I think this merits a bit more teasing out...at least until the next review is posted.

Well, well, what a discussion! It's certainly nice to see Anon, Anon & Richard so concerned, I wonder if they are also musicians?

As Stanley says it's really not that simple .... unfortunately.

I'm also a practicing musician and try to make a living out of my music, but it's not that easy. Bootlegs after all are just a tiny problem, and not really much at that. In fact if (and that you'd have to ask the CD labels) the CD has been pressed correctly then certain money will make it's way back to the artist in terms of radio play etc, if there is any of course. Secondly, I'm sure Ornette's people are aware of this and if not then they sure will be shortly, the ball will then be in their court. Oh, by the way it's not only Amazon that sells them look at CD Universe, AAJ, Discovery Records, etc.

Other problems concerning bootlegged concerts are actually more to do with musicians being used again and again. As an example most festivals record you for 'publicity' purposes, and you have to sign a contract saying it's OK. If you don't sign ... don't ask them to program you next year! Radio programs also often record concerts for free and of course broadcast them for free. Naturally you get the 'royalties' from your compositions when the music is aired, but you can imagine where these beautifully recorded sessions end up! - see next point -

Another point concerning bootlegs is that people buy these illegal recordings because they love the music. If the record put them out then they'd also be bought by the same people. As Stanley said FZ and the likes such as Robert Fripp (King Crimson) have understood the importance of owning your own bootlegs.

Lastly it seems though the illegal copies are here to stay, and luckily for us. There are so many wonderful recordings that have been made by fans of concerts that the record companies thought unimportant. Also since people/artists/labels just cannot keep up with the back catalogue of many artists the only way to hear out of print recordings is via the 'bootlegged' market.

If you really need to know more about this recording then I suggest you contact Gambit directly and ask them. This way they at least have to answer for themselves. Or any other suggestions, could be interesting?

Well that was my 20 cents worth!

Thanks for the really informative posts. In fact, the
only evidence that it is a bootleg that I can see is that it is called that in the review that Stanley links to.

I don't see anything on Domino's site that suggests
they are not legit. The fact that you can get it on Amazon strongly suggests they are.

I'll write them later today and report back.

P.S. Enjoyed the review. I hope it is legit so I can buy it!

What I refered to previously as Domino's site is actually just a site that sells their products. After looking further, I can't help noticing the site has a Diana Krall LP which appears nowhere in her discography, and in the link they misspelled Krall!

Also, Ornette has a website, the aptly named www.ornettecoleman.com, in which I don't see this
mentioned.

I am hesitant to write to Amazon. If they have failed to do their job properly, I'd hate to be the one who gets the CD pulled from their site.

So I guess we need to decide for ourselves. In any case, a useful discussion. I'm not a musician, just a fan. I feel badly for musicians who have to deal with this crap.

Just enjoy the music, otherwise you can always write to Ornette and ask him.

Interestingly enough, OC lists all sorts of grey area releases on his website, as part of his official discography. Too bad Revenant Records went under. There was movement on a 10cd set of archival Ornette in the works. Maybe one day...