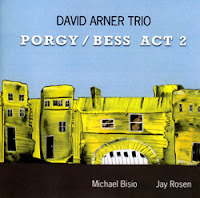 A little over a year ago, I was quite excited about David Arner's piano trio with Michael Bisio and Jay Rosen, called "Out In The Open". The same trio released "Porgy/Bess, Act 1" and now "Porgy/Bess Act 2", also on CIMP. The trio's take on the Gershwin classic is everything you could expect from Arner's light and precise touch, combined with an adventurous and abstract spirit.

I must admit that I am not too familiar with the original music, but that's not a real handicap to enjoy the music on this album. The themes and harmonics pierce through the improvisations once in a while, and you can recognise the stylistic elements of the mid-30s jazz, yet in order to capture the drama and the emotional levels more fully, the "soul" of the opera if you want, the trio uses the more dynamic grammar of today's jazz, and then pushing even that a little further into more expressive territories.

Bisio and Rosen are the ideal partners for Arner's now thundering, then sensitive piano-playing, often quite functional, with some though not much solo time, but with Bisio coming more to the front on the last track, "Lament", a duet between arco bass and piano.

Reverent for the original, yet utterly modern. 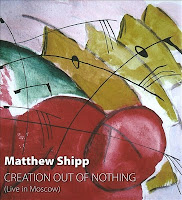 Matthew Shipp's solo album "Creation Out Of Nothing", is a little bit in the same sphere as Arner's, bringing solo improvisations in his own typical and creative way, but with standards popping up every so often, including "Summertime", "On Green Dolphin Street", "Yesterday's", in between his introspective and abstract musings, full of a strange angular lyricism, of the kind that does not flow like Jarrett's, but one that takes strange turns and even less expected returns to the core theme, but all in one movement, as if it was preconceived.

While he is playing, you hear his mind working with the chords and the progress, playing games with the structure and tackling his own ideas sometimes in the process (but I might be imagining this as I can't read the guy's mind, obviously). He is at his best when he does not seem to think (and again I may be mistaken), when his lyricism flows out of pure sentiment and heartfelt emotions.

Shipp is a great improviser, with incredible musicianship and command of his instrument, yet his improvisations on this album often lack the necessary tension to keep the listener's attention with the music. His best pieces are his own compositions : "Patmos", "Gammay Ray", "Module" and "Blue In Orion", four compositions that already figured on "One", and "Wholetone", a new composition that will also figure on his just to be released double-CD with Michael Bisio and Whit Dickey. His own creations are a lot stronger and more powerful than his elaborations on the standards. 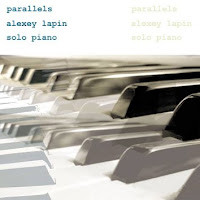 Russian pianist Alexey Lapin surprised me several times last years by his own playing and by the music of the various bands he played with : rich in scope, plenty of new musical ideas and with a willingness to explore with vision. Check him out via the search engine at the top right of this blog.

We find him now on a solo performance gig, playing fourteen pieces that range from the expressionist modern jazz to the avant-garde use of extended techniques. Even when he plays his piano in the conventional manner (using the keys unchanged), his improvisations are abstract, expansive and openended.

He surely deserves much more attention. A true artist. 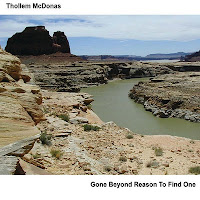 Another one of these underrecognised piano greats is Thollem McDonas, equally uncompromising, equally visionary. This solo album consists of two long and one short piece, full of thundering and dense playing, alternated with moments of silence and sparse, barely audible notes puncturing the emptiness around him.

As a modern pianist, extended techniques are a must, always used functionally, as in the second half of the first piece, playing in counterpoint with his regular playing. If anything, he is a master of variation, tension, changes in intensity shifting from exuberant expressionism to more intimate finesse.

Great piano music. Thanks!
Today it is easy to learn to play piano using great online resources. See the review on
http://musicalinstruments.topwebreview.com/learn-to-play-piano/