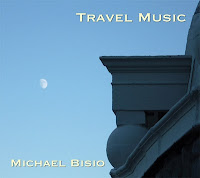 By Stef
A cold rainey night, with small snow flakes falling hesitatingly from the sky, and the best remedy for warming you up is this intimate solo bass album by Michael Bisio. I have written plenty of reviews of music with the bassist as part of the band, or even as leader of the band, but to my knowledge this is his first solo album.
It is intimate, remarkably so, yet even on the arco pieces, which tend to be a little bit more epic, the overall warmth of the sound prevails. And it is all about sound, the deep color of gut resonating through wood. Forget about rhythm, the bassist's usual primary role. Listen to Bisio's cover of Charlie Haden's "Human Being" and you will understand that Bisio is close to Haden in spirit, and possibly has been all along : an innovator with a soul as deep as his tones of his instrument. This is far away from the physical playing of Kowald, or the abstract precision of Barry Guy, or the expansive drive of William Parker, or the epic lyricism of Paul Rogers  ...
Bisio is himself : adventurous, yet soulful, taking his time to explore, avoiding shock elements or cheap effects, while at the same time avoiding the beaten track. Cautious precision, building his music around the empty space, and going almost in a dialogue with it, avoiding density or fast runs, but giving the strings the time to resonate in the full time it takes for the warm sound to gradually subside, to be followed by its successor, building harmonic sequences and some tension, just enough to keep the attention going, but not too much so that warmth is preserved.
His "hit single"  - "Nitro, Don't Leave Home Without It" also figures on the album as a very long an intense arco piece, the summit of the album together with "Oil", a very deep and slow bowed improvisation.
Even when playing solo, Bisio is self-effacing. His personality, his technique, his skills are all there, but fully in the service of the music, real music then, with a depth that transcends the physical aspect of sound : it is so full of deep "human-ness". An absolute joy to hear, in many respects.
Listen and buy from the artist's website.