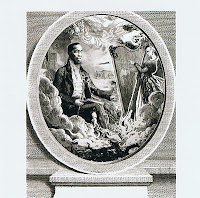 Sometimes the mixtures of conflicting genres can lead to interesting and strange blends, as is the case with this excellent album by Sonny Simmons and Delphine Latil.

Latil plays harp, is classically trained at the "Conservatoire de Paris", and a chamber musician, mostly with a trio with her brother and sister on cello and violin respectively, she also demonstrates her ability to improvise on this album, and go beyond genres: she can play jazzy, bluesy, eastern and also "hard-to-define".

Sonny Simmons never achieved the status that he deserved, because he's possibly too much of a seeker for that, never content with the idiom he's developed, continuously looking for new forms that go beyond the known. As his website says : "He's a healer. His playing has a soothing quality akin to that of John Coltrane. Once again, it's beyond notes, chords, improvisation, free or not. Voodoo, eastern philosophy, the Church, the blues - he's a synthesis, his music, a succesful syncretism." As on his fabulous "Tales of the Ancient East", he plays his "cor anglais" or English horn, an instrument with an easily recognizable timbre, sounding ancient with a welcoming buttery taste, the ideal instrument for his spiritual lamentations.

The duo brings us to the essence of music, of pure lyricism, and deep feeling. Think of Wadada Leo Smith's "Kulture Jazz" if you want a reference, with Simmons bluesy singing at times coming close to the trumpeter's.It is in spirit also close to the recently reviewed "Pulses" by Jin Hi-Kim and Gerry Hemingway, although less rhythmic.

A fragile, sensitive and beautiful album.

"too much of a seeker for that" indeed.
This record, along with another by Simmons (Fatherlands, in company of a french poet) is one of my most treasured musical encounters of recent times. I think your review says the essential about the emotional content, and the exquisite tone of the cor anglais.

Incredible music. Thank you for reviewing it. Great review by the way Stef.