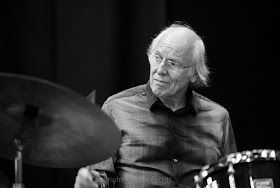 We are sad to announce that British drummer Tony Levin passed away at the age of 71. On this blog he was recently reviewed for his collaborations with Paul Dunmall and Aki Takase

I copy a first reaction by Simon Barber on "Interactivecultures".

"We are hugely saddened to report the death of drummer Tony Levin, who passed away today at the age of 71. Tony was a highly regarded jazz drummer and one of our partners on the AHRC KTF project. Together we developed http://tonylevin.org and produced academic research into building British jazz archives.

From 1980, Levin worked extensively with saxophonist Paul Dunmall, including as a member of the free jazz quartet Mujician, also with Paul Rogers (double bass) and Keith Tippett (piano).

Tony ran his own monthly club in Birmingham called TL’s Jazz Club and operated his own label, Rare Music Recordings. He had recently completed a successful 70th birthday tour, organised by Birmingham Jazz."

Our thoughts are with his family. We thank him for his contribution to creative music.

Yes I also read the news this morning and was very saddened by it. I was enormously influenced by his energetic playing and had the chance to jam with him on several occasions - with Philippe Aerts at the Travers whilst Philippe was busy making a recording with Tony.

I was also SO influenced by the music that he made elsewhere and Mujician being one of those projects. Fantastic musician and amazing music that he created, sad it's all come to an end.