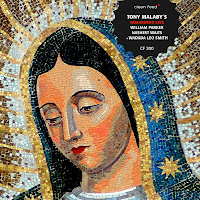 This is anthill music. Yes, that's what I said, anthill music, and you'd be right to ask what Tony Malaby's Tamarindo and anthills have in common. Well, have you ever spent a lovely afternoon lazing around having a picnic somewhere out in the countryside? And if so maybe you lounged around after eating, staring into the grass or field around you, and as time passes you notice you're sitting on (or near an anthill). Gradually you become engrossed and start to watch those ants running around (probably picking up your left-overs) in what seems utter chaos. Little by little as you watch you notice patterns forming, ants crossing paths without ever colliding, never an argument (as ants don't have road rage), so much happening, so busy. At times the ant rush hour slows only to build up again as other ants appear communicating something to their comrades which then renews the energetic bustle. They carry on their tasks in a way which become almost an art form, and what may seemed disorganised at first starts to take on form and order.

And that is why Tamarindo is anthill music. It's very much a music which buzzes with a frenetic pulse often building from nothing, each player seemingly takes his own direction and yet as the music advances you realise that everybody is following everyone else. It may sound like chaos to someone walking into the room, but when you're 'in' the music it's very exciting, full of energy, and yet with so much going on around you it's never crowded. In fact there's so much here to discover that you will certainly have to listen many times before really knowing the music.

It would be difficult (and maybe pointless) to single out different tracks as this album could be heard as a suite, and even if the tracks do have names and approximative themes that appear when needed (i.e. not always sax and trumpet, and not always as openings), they seem less important as it's more about capturing the moment. There are often quite moments of interplay such as on 'Death Rattle', 'Hibiscus' and in 'Jack the Hat', but much of this music boils away with fantastic interplay (as always) between these superb musicians - Tony Malaby (tenor and soprano sax), William Parker (bass), inspirational drummer Nasheet Waits and of course guest trumpeter Wadada Leo Smith.

The only odd thing is that the CD fades on the last track, perhaps they couldn't stop, or was there just too much good music to fit onto this release?

Tags for this excellent release could be - Mujician, Ornette's Science Fiction, The Thing, Vandermark 5, Supersilent (an acoustic version .... of course).

One of my favorite bands, but the sound quality is really poor. The album is just a distant shadow of the original Tamarindo. For me possibly the album that I looked forward to the most last year, yet also the biggest disappointment. Maybe my expectations were too high.

Yes, indeed, I did forget to add that this is a 'real' live recording, which means the sound is not studio quality ..... unfortunately. I wonder if they intended this? It's true that bands such as Mujician managed to record excellent quality live recordings, and stay true to their goal.

I didn't hear the other Tamarindo CD (2007) so unfortunately cannot compare the two, however I really enjoyed this and I wasn't put off by the sound quality, I just got into the music. I'd be interested to read how others (who've heard this) found it.

One thing's for certain I'll be listening to the first release as soon as possible. I'll be back with a remark on the two.

I have discussed with Pedro Costa from Clean Feed about the poor sound quality and here is his answer:

"CF 200 has poor sound, I know.
We hired a top engieneer from New York (Andy Taub from Brooklyn recording studio) to do the job but the room (Jazz Gallery) wasn't a good choice from Tony that loves to play there.
Everything was close miking but in the end the mix was impossible as the sound was everybody's mics and a total caos.
So, the only way to make it work was using the soundboard mix and that's what you hear.
It got me sick as we flu Wadada from LA to do this recording and in the end we got that sound.

Anyhow, we felt the music was tremendous and couldn't avoid putting it out.
I guess you understand."

I love that disc despite that sound.

Nice to read the story behind the record. I mentioned to Stef that I had meant to comment on the sound quality, but somehow forgot to include it in the review. As I said, I was so enjoying the music, I just forgot.

Hope it won't spoil it too much for anyone discovering the CD. As a musician I'm used to hearing half decent recordings of concerts and find myself listening to 'the' music and try to forget about the recording quality.

As much as I agree with you, Joe, that the beauty of the music should override any issue with sound quality, I think that the tastes of the average listener could be taken into consideration a little more.

Though I'm familiar with some of Malaby's other work, I have not been able to check this album out yet. Because of this, I'll just have to use Stef as a gauge. She even said herself that this is one of her favorite bands, but the sound quality was too much to overcome.

In my opinion, this is one of the greatest faults in jazz music post-1970: forgetting that the average listener will hear this, too. Being a jazz musician myself, I do take into consideration what the average listener might think when recording. This is not to say that I let it determine my every action like a pop star might; however, I do think it's important to consider a general audience when producing an album.

Thanks for the comments.

Actually I suggested to Stef that a little comment be placed at the end of the review explaining the sound problem. I'll suggest it again as it seems to be becoming an issue for this album - Stef if you're reading this!

Intrigued to see the tag comparison with an acoustic supersilent. This Tamarindo must differ considerably in musical style from the first if it sounds much like Supersilent 10 (their most acoustic release).
So now I'm wondering how a driving bass/drums/trumpet/sax combo sounds like a keyboard dominated, rhythmless band.
As a huge fan of Leo Smith I might just have to buy this to find out.
Nice review.

Interesting remark considering my 'acoustic' Supersilent. I must say I haven't heard SS #10, but if you start with 1, 2 & 3 you'll see what I'm talking about. SS #5 was very, very quiet with #6 really a mixture of all that came before. And of course 7 - till now etc. Supersilent never had a bass player either, if I remember correctly.

Concerning TAGS : These are just names that came to mind when thinking of comparisons, so don't take them too literally.

I also assume most readers read the comments, so no need to add this sound issue comment to the post itself. The title of the album is "Live", so I also assume that readers will be kind of expecting a live performance.

Could you have dispensed with the music comments and just elaborated more on the ants? Maybe just another paragraph or two on ants. I stopped reading after the first paragraph.

Glad you liked my ants review. Maybe next time I should work more in the insect comparisons!?

And somehow it was the firs thing that came to mind.