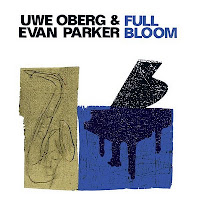 On the left hand side of the screen, Stef shares with us his "quintuple A" internal rating system. One aspect of the critical experience that isn't addressed in the 5A system also happens to be one of the great Bill Dixonisms, namely “did the record really need to be made?” When the answer was no, Dixon would often begin his analytic evisceration with “now there's nothing wrong with this particular recording...”

Indeed, there is nothing wrong with Full Bloom by Uwe Oberg and Evan Parker and, at the same time, there is little to suggest that this record needed to be made, in the macro, Dixonian sense.

Dixon also often said “If you really dig an artist, everything they do is important and of interest.” Verily, I do dig the fully realized great god father of the saxophone Evan Parker and as such, Full Bloom is a legitimate part of the Evan Parker Hadith worth investigating. So how bad can it be? The answer I suppose depends upon to what it is being compared and what you (are) like. Full Bloom's temprament leans toward the phlegmatic--more yin than yang—and there's nothing wrong with that. Some people like Star Trek for the metaphor, others like it for the lazer beams. Those falling into the latter category may want to walk to your local record store to purchase (with cash) the legitimate release Night Work first.

Sadly, Uwe Oberg is faced with the dilemma of being a the kind of musician for whom the entire history of the piano is within his very capable reach. The danger there is the tyranny of pastiche: Cecil Taylor, Andrew Hill, Boulez Piano sonatas, Conlan Nancarrow, and the perennial urge to play inside the piano without using the keys reveal themselves in a quilt (rather than a stew pot) of sound. When you add to that the menace of technical excellence and an advanced case of well proportioned sensibility, you're left with an Oberg who, like so much music today, is at once easy and difficult to relate to—like a comfortable, well appointed waiting room at the accountant's office. At least that's the feeling right now. It could very well be that Full Bloom, like a good Okanagan Cab Franc, will reveal itself more convincingly in the years to come.

Then again, it could also be that Full Bloom is a recording where the whole is less than the sum of the parts, destined to forever hover in and around the 3 star zone. That happens sometimes too you know.