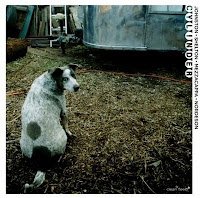 Ornette Coleman's musical revolution of the late 50s and early 60s is still alive, and this band is without a doubt its grandchild, with Darren Johnston on trumpet, Aram Shelton on sax and clarinet, Lisa Mezzacappa on bass and Kjell Nordeson on drums. And the reference to Coleman is not only because of the line-up, but primarily because of the music.

The core theme and the improvisations get priority over specific harmonies or fixed rhythms as the foundation of each composition. But they add the modernism, the technical skills and freedom of spirit that you can expect of today's jazz.

This a true band effort too, with all band members writing two compositions each and Shelton three, but you wouldn't know when listening, because the overall musical coherence is very strong.

I have listened to this album more than a few dozen times over the past few weeks, and I  keep reaching back to it, not only because I love the sound and the playing, but also because it has this kind of ungraspable quality : it remains totally unpredictable, leading to increasing moments of enjoyment with each listen. Sometimes angular, sometimes sweet, but deconstruction seems to be its main characteristic.

A theme is set, then it is gradually taken apart, stripped of its form while laying bare its true essence, in a trumpet solo without accompaniment, a bass, some violent drumming, a soaring sax, demonstrating the depth of the piece, adding emotions, different shades, sonic explorations and some rhythmics puzzles ... with a great sense of adventure but without losing track of the main theme, always coming back to it flawlessly.

The overall result is exceptionally good, not only because of the individual playing but because of the overal feeling of a band that creates something unique. Like the Ornette Coleman quartet, this is freedom in a fixed format, not the long expansive improvisations of the later Coltrane or Ayler, but expressive power without restraints within the confines of concept and structure and time. It reads like a paradox, and well, maybe it is, the characteristic of all great music.

And like Ornette Coleman, the themes themselves are often of a compelling and sweeping beauty.

Not to be missed!

I'm not quite sure what kind of stuff the cameraman smoked, but the clip reflects the music quite well, with the band playing "Sung By Dogs" in San Francisco on 6/7/10

This album SMOKES! I am a huge fan of Johnston's last album but this is a lot looser and free. Great, great stuff.