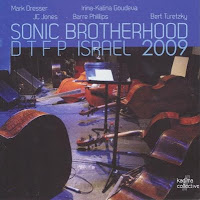 Some years ago Israeli bassist JC Jones started with the Deep Tones For Peace transatlantic initiative, which resulted in a first album and DVD last year, bringing together bassists from the US, Europe and the Middle-East, playing together from two locations in New York and Jerusalem.

This album gives additional material from the performers in Jerusalem : Mark Dresser, JC Jones, Irina-Kalina Goudeva, Bertram Turetzky and Barre Phillips, playing as a bass quintet on three tracks, some duets between Dresser/Jones, Turetzky/Philips, Goudeva/Turetzky, Phillips/Jones, and three solo pieces by Goudeva, Dresser and Phillips. All tracks are free improvisation with the exception of Goudeva's solo, which is based on  a composition by Julia Tsenova.


Musically the solo pieces get my preference, because of the clarity of the sound, yet the quintet also avoid the wall of sound effect by playing a lot with bow and alternating amongst the five bassists, resulting in a nice listening experience. Dresser's solo piece is without a doubt the highlight of the album.

Even if the album does not add much new to the previous one, it is quite good, and should certainly interest lovers of music and peace, and not only bassists.


Samples can be listened to on the website of the International Society of Bassists.