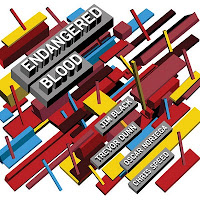 For more than a decade, reedist Chris Speed and drummer Jim Black have designed an unusual blend of sweet melodies, rock percussion, jazz sensitivities and free improvisation, evolving from the band "Human Feel", developing into "Yeah No", the more "balkan"-oriented "Pachora", and Black's more rock-oriented "Alasnoaxis".

Despite their obvious differences, all those bands share the same "sound" of warm and welcoming themes and melodies, somewhat naive and innocent in their approach like there is no problem in the world, only joy and beauty. This uplifting sound and musical universe is then contrasted with the rock solid percussion work and the deeply emotional, often distressing digressions into more free space.

"Endangered Blood" builds on the same concept, this time in the company of Trevor Dunn on bass and Oscar Noriega on sax. Finding the latter musician back so many years after his debut (and only?) album "Luciano's Dream" is a real pleasure. I had been on the look-out for new output by him, but found nothing.

The double sax front of Noriega on alto and Speed on tenor adds even more warmth to the unison lines than with either the trumpet or electric guitar of the other bands. The second track "Rare" is a nice example of this. You hear it for the first time, but you will be able to identify its musical origin, not because the music is repetitive, but because of the clear musical vision created over the years.

It also illustrates the how the sweetness needs only a little touch to change into drama, sadness and wailing pain and back to sweet naivité.

The great thing is that the musicians feel so at ease in their own idiom, that the joy of playing and the endless touches of ear candy.

The album is better than the performance below, but it will give you a taste of the sound.