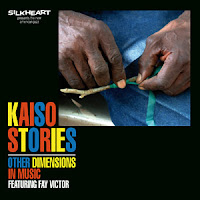 So this is what a Five star recording sounds like...now I know: Kaiso Stories by Other Dimensions in Music featuring Fay Victor, how do I love thee? To get a sense of the sum, let's first look at the parts.

Charles Downs (like Laurence Cook)is also a national treasure. Downs' deep relationship with the ride cymbal and acute harmonic (as opposed to strictly percussive) consciousness deserves wider celebration. Downs can play the drum kit tonally, harmonically, and in so doing participates in the larger improvised “discussion” with more depth than merely chang-changa-chang. That said, in all honesty, Downs' gift with subtly really does pale in comparison with his ability to propel. Downs' relationship with time is refreshingly elastic. He moves effortlessly from floating puffs of rubato to prestissimo rides on the drum kit bullet train. Through it all, Downs retains his humanity and keeps his composure. Downs is cool. Downs radiates a connection to the larger drum tradition for which Downs is one of the great living representatives.

Of all the trumpet players I have heard, Roy Campbell does the best job of filling the vacuous void left with Dixon's passing. In the clutter of Bb instruments in “Free Jazz:” Campbell's playing is striking in the way that all great art is striking--full of invention and flexibility with out being full of shit. There is a realization to his playing, a lushness of tone and, again, as with Downs, a humanity, a realness.

Like Campbell, Daniel Carter is instantly recognisable as Daniel Carter, regardless of which instrument he's playing. On Kaiso Stories he plays alto, tenor and soprano saxophones, flute, trumpet and clarinet. (Combine that with Campbell's trumpet, pocket trumpet, flugelhorn, flute, recorder, shepherd pipes, arghul, bird whistles, panpipes and bells, you get a sense of the sound kaleidoscope.)

There is so much good to be said about Daniel Carter, both the person and the musician. On Kaiso Stories we get a fairly panoramic view of Carter's epic, consummate musicality. His originality is a given—it's the enduring originality that's so impressive; If you've heard him once he's forever immediately recognizable. That's not by dint of gimmick, but by thoughtful consideration of the musical context and a long fermented musical concept executed with well practised dexterity. More amazing still is that this holds true for all the instruments he plays.

Carter's (as well as Campbell's) rotation through their various instruments in the course of a single song while maintaining their signature harmonic sensibility creates a pan tonality that sets the bar pretty high for groups of the future.

Then there is William Parker. Rather than thumb nail Parker's eminence as bassist or centrality within the network of Improvising musicians, let us instead consider the span of Parker's relations with Downs, Campbell and Carter.

To start, there's The Eighth by Cecil Taylor with Downs, Parker and the incomparable Jimmy Lyons. That was recorded in November 1981, 30 years ago (and is 5 star recording, in case you were wondering.)

Next there is Acceptance of the Mystery Peace by William Parker—a large group with Daniel Carter in the multi instrumental capacity. This was recorded in 1974, 37 years ago.

Last, there is Konstanze's Delight by the Jemeel Moondoc Sextet, featuring Parker and Campbell, also recorded 30 years ago in 1981.

The 97 years embodied in those relationships puts Kaiso Stories in a different league than most music today. How many of us will still be making music with our current collaborators 30 years from now?

And then there is Fay Victor. Full disclosure reveals an initial wariness. Besides the fact that the voice has not enjoyed the glorious run as the alto saxophone has in the improvised music supplanting “jazz,” there was the nostalgic me that wanted to relive the early 90's when I heard Other Dimensions In Music at the Old Knitting Factory the week before the historic Houston location was closed forever.

Further full disclosure reveals an initial uneasiness with Victor's contribution for the first few minutes of Maryanne Revisited. That unease gave way to utter elation when it was revealed that Fay Victor was (duh) revisiting the song Maryanne, as in “all day all night Maryanne.” It was at that point point I caught up to
with Victor's tremendous musicality, which only continued to unfold for the rest of the recording.

Chrissy Hinde, Abbey Lincoln and Yolandi. While Victor sings lyrical content masterfully, her sprechgesang and non-lingual, instrumental use of her voice is at least as striking. Victor's voice sonically melds with Carter and Campbell, becoming a third horn, adding compelling counterpoint throughout.

There are substantial instrumental sections without Victor as well. Here is where nostalgia is fulfilled, where we get the latest instalment of the stories begun on Other Dimensions in Music's self titled first album. There is also the accessibility of song and the familiar (structural) comforts of Jazz. Calling it our Astral Weeks might not be the best analogy and, at the same time, it might not be the worst one either. In a civilized world with a forward thinking music industry and curious listenership, in a culture a where Art was as valued as everyone likes to say it is, Kaiso Stories would be a cross-over sensation, charting for months and finding a grateful audience that no Improvised music had found before. Until such time, it is one for the initiated to treasure.

always great to read such enthusiasm. This certainly sounds an intriguing release. Victor's statements about this being a 'calypso project' add to the attraction - a free jazz/Carribean fusion. Will be interesting to contrast with William Parker's 'vocal' Corn Meal/Curtis Mayfield ensembles

In my opinion, it is totally different than the Curtis Mayfield or Corn Meal albums.

This is primarily a Fay Victor album with ODIM as "support" band, although they do a lot more than just support, of course.

In my opinion "Raining On The Moon" is a level better, but that's of course a very subjective judgment.

@Stef: If "Raining on the Moon" is indeed totally different (which I agree with) - than how can one be '1 level' better than the other? I am curious how you arrived at that conclusion.

@Jochem : Like "Pulp Fiction" is a totally different movie than "Rain Man" but also better. Or "Winter's Bone" versus "The King's Speech". But I'm aware of the subjective judgment in this.

My original comment deliberately said 'contrast' this with the William Parker projects. I didn't mean for a better/worse comparison but for a comparison of style and approach and also content vis-a-vis the Caribbean influence. Stef's initial comment makes this contrast - ODIM as a 'support' band.
I'm also interested in the contrast between the 'urban' nature of the Mayfield source material and the 'rural' of the Corn Meal projects. Victor's own writings on this album allude to both elements in her work.

I'm Fay Victor and many thanks for listening adn reviewing KAISO STORIES. I'd like to add that although I lead this project, this is truly an ensemble effort. ODIM did not 'support' me and furthermore I haven't been involved in a project with musicians 'supporting' me in at least 10 years. Thanks

Thanks for recommending this, picked up this cd today and it's truly a five star recording