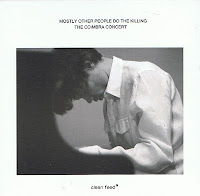 Now, when hearing their new double live album, I have the same sentiment. The playing is even more superb, jaw-dropping and spectacular and fun, with changes of style, tempo, rhythm, arrangements, with tunes flawlessly merging into one another, with a band of equals that is fully at the same high level, throughout the album, diving and reworking jazz history, swing, blues, full of fun and drive and enthusiasm and raw and rebellious wildness of modern music, fully enjoying themselves in the process ... with little jokes and quotes and throwing balls around for the other player to catch and pass on flawlessly at breakneck speed to the amusement of the audience.

The band is Peter Evans on trumpet, Jon Irabagon on sax, Moppa Elliott on bass and Kevin Shea on drums.

The downside of all the fun is the same as with all humor, it creates an emotional distance that needs to be bridged in true artistry. It is somehow non-committal, not the expression of real feelings of anger or madness or sorrow ... but that is clearly not the intention either.

(and did you expect a comment on the Keith Jarrett Köln Concert art work ressemblance?)

I think it's good that they finally put out a live album, since that's where they really shine, especially when they change seamlessly from one song to the next.

I don't really understand the criticism about this band, sure they limit themselves but this limitation is what makes them special. If you want to hear them do something else, they have plenty of other projects that sound quite differently from this one.

It's not a criticism : just a description to inform the reader about what she can expect. I like this band a lot. And as you say, they have indeed more artistic ambitions in other projects.

They did it before with their covers. The earlier one resembled roy haynes album cover.

I've listened to this group's recordings and each time I realize for myself that they are just making fun. This is not the way I like the music to be played. I was fine with the first album, but then it becomes annoying. Sorry for saying that because I think they have their fans who like that.

Hi there! Interesting comments. I can only speak for myself here- I don't feel limited at all when I play in this band any more than any other context I play in. Moppa is the most un-controlling bandleader I've ever played for. I'm certainly not restraining myself in any particular way or trying to deride any type of music. Having fun is different than making fun.

I accept that there are many who might not like what we do, but it does seem to me that with this band (much more than others I play with) people's problems are more conceptual (subjective ideas of authenticity or humor, for instance) rather than concerned with the actual sounds we are making.

I've noticed that with some of our influences (Clusone 3, ICP) people have had the same problems, assuming that because musicians choose to disassemble older musical forms, they must hate them or must be making fun of them somehow. Or that we are simply trying to amuse the audience- do you really think that's what we are thinking about on stage? Very strange to hear when you are the one making the music!

You are correct Stef in pointing out the inherent artifice in what we do. I guess the difficult thing we are asking of listeners is to come in both directions with us- one towards very distanced, abstracted presentation of "old" material and another towards "real" improvised musical expression. We think all music should be both taken seriously and just as easily treated as an absurdity. We really are trying to have our cake and eat it too!

This conversation, more than the review even, make me want to hear this recording. Good stuff!

I can only recommend the album. As I've said before - only your judgment counts.

"The downside of all the fun is the same as with all humor, it creates an emotional distance that needs to be bridged in true artistry. It is somehow non-committal, not the expression of real feelings of anger or madness or sorrow ..."
This is very well expressed. An extreme example would be ALL the work of Frank Zappa. But at the same time isn't JOY a real emotion that can be expressed through humour? That's what I get from MOPDTK. I don't get anger or sorrow from them, but are these emotions essential to all great music? And I do get madness! Same with ICP.