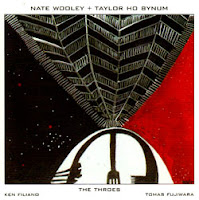 There isn't much music with a double trumpet frontline, and when this frontline consists of Nate Wooley (on trumpet) and Taylor Ho Bynum (on cornet) the expectations are even higher.  They played together on several of my five star albums of recent years, including "Guewel" and "Ashcan Rantings". And they deliver the goods, with Ken Filiano on bass and Thomas Fujiwara on drums to complete the quartet.

The music is a kind of free bop, clearly indebted to the Ornette Coleman heritage, but then also reaching far beyond it, into today's music, full of quirky elements and technical sophistication and lots of fun and earcandy.

Next to the six "composed" pieces, the album contains four duets, each time by one of the horn players alternating with bass and drums.

The compositions are fine, but the soloing and the interplay are excellent, with the kind of high energy urgency, intensity, immediacy and expressivity that lifts the genre above many other musical styles. And that's not only the result of the horns, just listen to the fabulous interaction between Filiano and Fujiwara on "Face To The Sun". Or listen to the gradual build-up of "Narrows" evolving from alternating free form duets into some form of loose theme only to be deconstructed and reconstructed again, changing the rhythm, adding a bass vamp, increasing the intensity into a climax.

And then to hear these musicians interact is already worth the purchase of the album : the trumpets are duelling, reinforcing each other, going off on different tangents, playing, but also capable of creating more emotional atmospheres.

The weirdest composition, but one of the most memorable is "Ish", built around a strange theme giving a kind of sucking sound as if the music was played backward, then changing into vibrating and hovering trumpet sounds hanging in thin air, evolving into a kind of quarreling dialogue, then to bop.

And that's without a doubt the great power of this album : its endless thematic development and changes making the music quite elusive and very captivating at the same time. You can't take hold of it, but it takes hold of you!

Watch the band play "Face To The Sun"

Hmm.. Too much tootling.