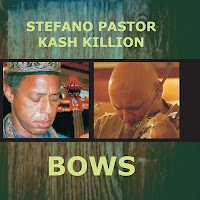 I have written about Italian violinist Stefano Pastor before, explaining how the sound of his violin is pretty unique, with a kind of hoarse rasping quality that brings it sometimes closer to a reed instrument than a real violin. This warm and breathy sound offers totally new possibilities of expression.

On this album he finds a soulmate in Kash Killion, a cellist from San Francisco, who also plays sarangi and other string instruments. He played with the Sun Ra Arkestra, Cecil Taylor, Billy Higgins, Pharoah Sanders, to name but a few.

The album starts with a pleading composition, "Obstinacy", with Killion playing primarily pizzi as rhythmic support for Pastor's yearning violin. The other most jazzy tunes are the two Monk compositions "Epistrophy" and "Ruby My Dear".

But the duo is at its best with the slow freeform pieces that are full of world music influences, as in "Shanti", on which Pastor also picks up his flugelhorn, and Killion his sarangi,and in "Ahimsa", with a strong Indian influence and a hypnotic repetitive bowed phrase on the cello as background for the violin's improvisations.

The playing is strong, although purists should abstain : neither the violin nor the cello sound as expected, but what they lack in "classical" sound, they gain in expressivity and energy.

The somewhat brusque alternations between boppish playing and world music diminish the coherence of the album, although each track stands well by itself.