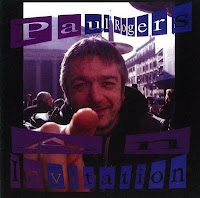 Just to make the comparison, I listened to Paul Rogers' "Being", released four years ago on Amor Fati, in order to analyse this - again stunning - solo album by the British bassist.

An invitation is, as the title suggests, a little more inviting, more accessible. It is not the one long improvisation on which the artist bares his soul, but a more intimate album, containing ten compositions, allowing for a little more l'art pour l'art, in which the musician not only demonstrates the breadth of his fabulous technique, but also offers a more playful approach with influences, coming as easily from jazz as from British folk music, as from classical, or even bluesy slide guitar.

His technique, coupled with the possibilities of his custom-made 7-string bass create at times the impression of a dialogue, as if two instruments are playing, yet it's only one, without overdubs.

Rogers' most incredible skill is to create tension from the very first notes and keeping the attention going, capturing the listener fully, developing the tension, adding new elements, move to piercing arco sounds that resonate with every nerve cell in your body and keeps them vibrating for a time after the music has stopped.

Not all tracks are of the same austere coherence, but some pieces are absolutely fabulous, with the final piece as the highlight of again an incredibly strong solo performance.


On a side note :  solo bass collection

I thought I had collected quite some solo bass albums, but I received an e-mail from a German music fan who collected four hundred solo bass albums, albeit with a definition that is somewhat loser than mine. For reasons unspecified, he would like to make this collection available to an interested institute, or sell it. If anyone's interested, send me an e-mail and I'll put you in contact with him.