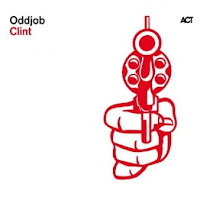 I should say that even though I only rated this album with three and a half stars I have no hesitation in recommending it. Unfortunately on a blog like this we receive so much cutting edge and boundary pushing music that a band like Oddjob is a little out of place, but maybe only stylistically.

Oddjob is a band that has already made several CDs well received by critics and fans alike. Like such groups as 'Kneebody', 'The Inhabitants', or even 'Troyka', they blur the edges of rock and jazz, feeding off the ground broken by Miles Davis' Bitches Brew .... and beyond. In this case (as the title suggests) the tunes are taken from various Clint Eastwood movies, giving an extra element of film soundtracks and the atmospheres that go with it. I should add that one shouldn't expect a Ennio Morricone pastiche album, the music is taken from all sorts of movies such as 'Where Eagles Dare', 'Scorpio', 'Magnum Force' as well as 'The Pale Rider','Hang 'Em High' and of course 'The Good Bad and the Ugly'!

The music is extremely well thought out and arranged with a front line of bass clarinet and trumpet giving a slight retro sound to the themes. The group is normally made up of drums, piano, keyboards, bass (electric and acoustic). Here they seem to have added to the line-up baritone sax and peddle steel guitar (I don't have any other information), the latter taking a slight cue from either Brian Blade's Fellowship or Dan Burglund's Tonbruket, is used to great effect either as a chord instrument or when doubling themes with the two horns. As already stated the music is naturally filmic and very atmospheric, trumpet sounds being manipulated and doubling of bass and bass clarinet creating ostinato like figures which serve well for improvisations.

Keyboards distort and ring modulators hum away giving the music a feel one relates to films and TV series from the 70's such as 'Shaft', 'Bullet', or even the 'Streets of San Francisco'. There are solos, but in general the themes and the arrangements are what the group really pushes to the fore and to great effect. The music is superbly played as the group really grooves away on all tunes, bringing out the dark atmospheres that were often part of these films plots. I can imagine this would be one hell of a band to see play this music live.

Even though this is not a 'free jazz' record one shouldn't hesitate, especially if you're interested by music (albums) such as - Zorn's 'Spillane' or 'The Big Gundown', Herbie Hancock's - 'Death Wish', Dave Douglas 'Witness'. It will certainly be back in my CD player on a regular basis.

The band is : Goran Kajfes on trumet, Per Johansson on sax, Daniel Karlsson on keyboards, Peter Forss on bass and Janne Robertson on drums.

It is interesting, but also very musical. It's kind of a mixture between prog-rock(*) and jazz meets film music. And as I already mentioned in the review it's well arranged and beautifully recorded .... plenty of little details etc.

Hmm, that clip didn't convince me as much as the review because they just play the theme as it's written without actually doing anything of their own with it... is it different with the other tracks?

Gutbucket gets the award for rock/jazz thing 011

Yes you're quite right. As I think I mentioned in the review there's not that much 'jazz/improvisation', as I said (maybe not clearly enough) :

'There are solos, but in general the themes and the arrangements are what the group really pushes...'

I really enjoyed the record and as I mentioned it's a little like John Zorn's albums 'The Big Gundown', the themes get a good working over played by modern instruments and given a updated sound and version.

Thanks, joesh, I'll check them out