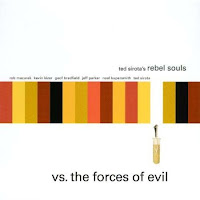 I hadn't heard Ted Sirotas work before digging into "Vs. the Forces of Evil", but just a glance through the personnel indicated I was in good company and the Latin groove of the opener "Grendel" -- reminiscent of Return to Forever ala Light as a Feather -- that came on when I clicked play on the iPod, confirmed that I was in for a treat.

'Vs. the Forces of Evil' is a recording dating back to 2000, it appeared as a CD release in 2001 and is now being rereleased by Naim digitally and on CD. Though pushing 11 years old, the sound is quite contemporary and it's great to listen to this group of musicians who have mostly moved on to other projects. The group, at this point in time, was Ted Sirota on drums, Geoff Bradfield on alto & tenor saxophones, and bass clarinet, Kevin Kizer on tenor saxophone, Rob Mazurek on cornet, Jeff Parker on guitar and Noel Kupersmith on bass.

The opening 'Grendel' is a tightly arranged tune, propelled by the strong aforementioned groove and features Mazurek's bright and energetic cornet playing off Sirota's effective high hat. Tight horn arrangements tie the soloists together, and the sax solo about three and a half minutes in builds in intensity, getting tangled up in the blankets of percussion, and finally building to a climax midway through the song. Parker pulls back the volume a bit, though his clean toned runs cannot dampen the rhythm section's smoldering intensity.

'Tight Rope' opens things up with elements of free playing and concurrent melodies. The drums rumble through the beginning and slowly build into a steady vamp. Parker's guitar takes on some different shapes here, employing effects and washes of sound. 'You Know Me', is a ballad with some tender but tough moments. Sirota's drums are front and center, setting the mood. The horn arrangement on raggae-ish 'Tubby' are spot on, and Parkers comping keeps the tune buoyant but still infuses a needed hint of darkness. Solos spin out of the song like little bolts of lightning in a Tesla ball.

'Impengu Dek Bengikai's' calypso like rhythm is infectious and the head arrangement is very cool, for a lack of a better word. Mazurek's cornet shines halfway through the tune, giving it a charge of energy. The two rather straight ahead bop tunes 'Dig to China' and 'Betsy's Bash' are uptempo romps with imaginative solos and some solid heads. Finally, the hard-bop genre is touched upon delightfully in the closing 'Wonder', in which Parker pulls out some sublime bluesy lines.

If there one thing to point out is that the energy is sometimes controlled by the arrangements a little more than I would like - there are moments when I'd love to hear it get kicked up one more notch. Regardless, the high level of musicianship, imaginative solos, solid arrangements and sheer variety of musical styles make this a recording something to come back to again and again.