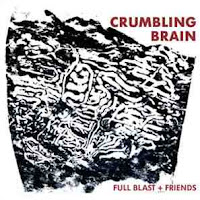 Full Blast is Peter Brötzmann on saxes, clarinet and Tárogató, Marino Pliakas on electric bass and Michael Wertmüller on drums, and with the three of them they already honor the band's title quite well, but here the band is expanded with Mars Williams on sax, Keiji Haino on electric guitar and Peter Evans on trumpet for this live performance at the Jazzfest Berlin in November 2008.

The band's simples recipe is as hard and as energetic as possible and please without breaks. The aptly named opener "Crumbling Brain" starts full force and just never releases the high speed mad power of the band. The second track starts suprirsingly slow, with Brötzmann playing a long solo, but luckily the band pushes him onward and forward into hurricane mood, ending with a great full stop resulting in the deserved appreciation of the enthusiastic crowd.

The short "Have Your Eyes", is a little more subtle for thirty seconds, until Wertmüller comes crashing and thundering down and Bro goes back into the stratosphere, to be joined by the friends at the end of the piece, led by a soaring trumpet blast by Evans. Total chaos ensues.

Side B (yes, this is vinyl) starts with drumming and crazy and maddening guitar sounds, which suddenly and unfortunately loses its momentum and falls into a kind of hesitating feedback with Wertmüller seemingly a bit at a loss of what to do. The next track is even less inspired, with weird shouts and chaotic interplay.

In the last piece, "Deathbop", the raw power-play gains control again with the saxes and trumpet in full blast.

In short, a tremendous first side, with uncompromosing raw focused violence, and with unfortunately a little less of this and more meandering developments when the "friends" join on the B side. But that's always the risk of course.

Watch the band in its best format, as on the A side of the album.