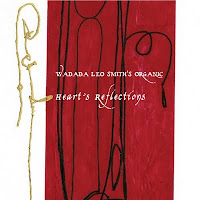 Q : Stef, again a 5-star album, and again by Wadada Leo Smith .... Aren't you a little bit exaggerating?
A : I might, but then I mightn't. This is again fabulous music, very much in the vein of his previous album "Spiritual Dimensions".

Q : Is it similar then?
A : Yes, on this double album, the line-up is very similar with Wadada Leo Smith on trumpets, Brandon Ross, Michael Gregory, Lamar Smith, and Josh Gerowitz on guitar, Skuli Sverrisson and John Lindberg on bass, Angelica Sanchez on acoustic and electric piano, Stephanie Smith on violin, Casey Anderson on alto saxophone, Casey Butler on tenor saxophone, Mark Trayle and Charlie Burgin on laptops, and Pheeroan AkLaff on drums.

Q : I thought you were all about adventure and uncharted territories?
A : Yes, and they do in a way. They take the electric Miles Davis legacy and push it into today's world.

Q : What is it then?
A : It is funky, hypnotic, tribal, spiritual, uplifting ... with pumping basses, soaring trumpets, shredding guitars, polypolyrhythmic drums.

Q : Sound like fusion?
A : No, definitely not. It's all about the music, not about the instrument skills.

Q : But there is some guitar shredding for sure?
A : Yes, there is. And even if I don't like it usually, I can appreciate it in this context.

Q : What is then so special about it?
A : The overall sound, the variation between slow spiritual moments and almost danceable uptempo pieces, the instrumental prowess, the interplay, the unbelievable feeling to be one with it all, because it resonates so deeply with everything that feels true and warm and human.

Q : Doesn't it affect your credibility to always give a 5-star rating to a Wadada Leo Smith album?
A : I indeed gave five stars to "The Blue Mountain's Sun Drummer", "Tabligh", "Compassion", "Spiritual Dimensions", "America", "Wisdom In Time", but I was less impressed by the two albums on Treader ... and I don't care about my credibility.

.... Can you now please stop asking all those questions and start enjoying this music?

Thanks for such an entertaining review, Stef.

I'm also a big fan of Wadada Leo smith and find it difficult not to rate the releases you list as high as you do. I purchased Blue Mountain's Sun Drummer solely on the strength of your review and wasn't disappointed in the slightest. Looking forward to purchasing this one too

Hi Stef, I also love this music and had a great time reading your review. These albums Wadada is making are classics and it is amazing to see him go from duo to large formations with the same urgency and spiritual energy. In his hands, electricity becomes organic.

I agree with Stef. I am just listening to this recording now and it's a complete blast. Definitely one for best of the year list.