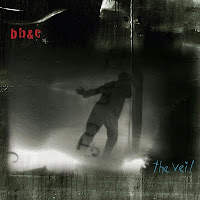 I recall a coffee table book, probably from the late 90s, that was dedicated to photographs of industrial spaces. The stark black and white photography, with subtle shades of grays and grittiness, revealed a certain beauty in these man made landscapes. Stretching from Jersey City to Berlin and beyond, these images were at the same time austere and deeply fascinating. 'The Veil', by BB&C is full of these industrial grays and severe lines, and it too reveals a deep beauty in the absence of the conventional.

Reportedly recorded on a sweltering night in the spartan performance space The Stone, in New York City's East Village, alto saxophonist Tim Berne's trio consisted of Jim Black on drums and Nels Cline on guitar and electronics. It was a pairing, that when I first heard of the record's release, had me anticipating something special.

In heavy rotation on my iPod lately has been Tim Berne's Big Satan's 'Souls Saved Hear'. Berne's muscular sax and fractured melodies intertwining with Marc Ducrets fretwork is captivating. Too, Berne's work with Frisell, Hank Roberts and Alex Cline on Fulton Street Maul is another highlight in my collection. Jim Black's work with his group AlasNoAxis is always an elastic and sharp affair, his sense of rhythm and time are a fascinating study.

So, yes, I had some high hopes and I was not disappointed.

From the opening passages you can tell that these are masters at work. Behind the doors of their industrial space, they are wrapping Waterford crystals in sheet-metal and playing catch. They are sprinkling machine nuts in the gears watching it sputter and spit out twisted scraps and unanticipated treasures.

The recording begin with 'Railroaded', or more precisely, with some rapid fire chords from Cline and complimentary rhythmic attack from Black. Soon, Berne comes in wringing a melody from a few notes he found lying on the shop floor. Amid some mild skronks and circling phases, Cline and Black build up into a heavy rock figure that soon gives way to a frenetic improvisational climax between Berne and Cline ... and were only a few minutes in!

The next song, 'Impairment Posse', continues the dynamic interplay between the trio. The song's textures and tempos undergird some tough playing, that at the same time exudes a subtle melodicism. Segueing seamlessly into 'Momento', the textures change again, lighter but still edgy, and soon we are moving amongst sinister shapes and sounds.

The energy and passion in these passages -- this must have been a long improv with few, if any, pre-determined structures -- is industrial strength. A favorite moment of mine is 'Barbarella Syndrome'. The trio, by now well warmed up, builds into tense juggernaut, then suddenly drops out, leaving Berne fluttering and exposed. What a moment.


I fear my hyperbole and strained metaphors are probably doing more damage than good in explaining this music at this point. Go find this album, however you do it, by store, by mail, or by Internet, and revel, like me, in its dark and twisted loveliness.

Great review and I can tell you are pleased with the music. Nice blog post! Have a lovely weekend.

That's pretty much a dream trio. The Big Satan Album has logged a lot of time on my iPod too. Getting this one, for sure.

Just picked this up. As good as advertised. The chemistry between the 3 is great.