Great drummers tell stories: they are not only the time-keepers or the rhythmic base of the band. Great drummers make the music. Jack DeJohnette is in that category. So is Hamid Drake, so is Eddie Prévost, so is Tom Rainey. And so is Gerald Cleaver. It is extremely difficult to describe music, so I will refrain from describing why Cleaver's quality is exceptional. I can only invite you to listen.

Just look at this quick overview of the past few years, and check also the ratings given by your humble servant.

... and this is only the output of the last two years, something to make many musicians jealous.

Why is Cleaver a story-teller? Because he uses his instrument to create tension, drama, suspense, emphasis, by using space and time, and then surprising you with some creative angles, adding that touch more, that aspect that put is all in a different perspective, that touch that makes the overall sound of the music.

I am toning down a bit on the stars, but the first two albums reviewed below might well end up in my best-of-year review. 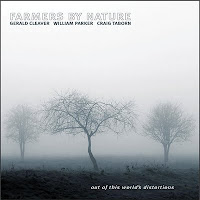 Like on the previous album, this piano trio again demonstrates that it's one of the best around (more examples to come soon), with Craig Taborn on piano and William Parker on bass. It is also one of those rare piano trios that manages to create a common sound, rather than being just a piano plus rhythm section. The music is intelligent, creative, expressive, incredibly well-paced and precise. It is not really minimal but the "less is more" approach leads to a kind of refinement that is devoid of constraints, full of subtlety and warmth, and sudden surprises, and surprisingly enough, all this while pushing the boundaries of the piano-trio-as-you-know-it. Forget Bill Evans and Keith Jarrett.

Every single track on this album is of the same high quality, because each of the six compositions offers a totally different yet equally captivating story and character, ranging from slowly meditative, over quirky to hypnotic repetitiveness, but then just not of the kind that you are familiar with. Cleaver, Taborn and Parker play all three at an exceptional high level with an equally strong coherence in their musical vision. 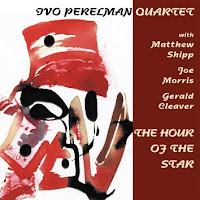 As mentioned before, Brazilian tenor saxophonist Ivo Perelman has a great admiration for his fellow compatriot and author Clarice Lispector. She continues to inspire him on this album, with her novel "The Hour Of The Star" forming the reference. But to which extent the six improvisations try to evoke the story itself, is hard to assess without having read it. The band is Matthew Shipp on piano, Joe Morris on bass and Gerald Cleaver on drums.

From the very first second, the quartet is gone for a nervous journey of mid-tempo and mid-range playing, a little off-kilter, full of density and intensity and evolving to a climax of sorrowful wailing by the tenor. The second track - without piano - starts more playful, lightfooted, slightly dancing, boppish, with tender soloing by Perelman, then shifting suddenly into rock 'n' roll then back to free bop.

Yet the title track starts with a few minor chords on the piano setting the scene for a piece reminiscent of David S. Ware, expansive, expressive, soaring. Even if all four musicians excel, Shipp's magnificent harmonies give the piece the depth it needs : he can be soothening when Perelman goes berserk, or he can accentuate the madness by adding to the dissonance, then shifting back to warm chords, while Morris and Cleaver play up a storm. The contrast is fascinating and wonderful, and just listen to Shipp's smooth soloing with Cleaver just refusing to let go of the power-playing, inviting Perelman back in ... in full force, unleashing all his energy and feelings in a paroxysm of sound.

"The Right To Protest" is calmer, with tenor and piano having a conversation, a nice dialogue, demonstrating Shipp's excellent reading of Perelman's playing, almost symbiotic.

Then listen to Cleaver's intro on "As For The Future", building up tension, ... and tension ... and tension, a delight of restraint and skills, leading up to again a joyful entrance by Perelman in full support of Morris' rock solid bass, gradually picking up speed and intensity. The last track starts with an intimate bass and sax duet, hesitating, circling, and this kind of stop-and-go approach is maintained when Shipp and Cleaver join, with odd counterrhythms moving the piece forward in a fluent yet unpredictable way, shifting the mood from soft sensitivity to violent rage and back. 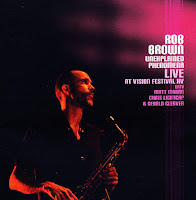 The reviewer's frustration is his inability to review all the great music that comes his or her way. And so it is with the music of Rob Brown, one of my favorite altoists. His duo album with Daniel Levin is still lying here, waiting to be reviewed, and so is the Rob Brown Trio, just released on RogueArt, another French label.

The band conists of Brown on alto saxophone, Matt Moran on vibes, Chris Lightcap on bass and Gerald Cleaver on drums. Brown is an extremely lyrical saxophonists, who likes a composed basis for his very sensitive and warm playing. And like on his previous albums, Brown does not disappoint. His compositions are really beautiful and compelling. Listen to some pieces just a few times, especially the great and long "Lurking/Looking" and its melody will stay with you for a long time, full of yearning and melancholy.

On this album, the rhythm section is really very much in support of the altoist, but the instrumental qualities of Moran, Lightcap and Cleaver are of such a degree that they are more than just the rhythm section. Moran manages to change the sound color into a different atmosphere with subtle and velvety touches.

A great thing about this album is that it was recorded live, with the audience participating enthusiastically.

Rob Brown will not change music history, but that is of course only given to the very few, but he manages to systematically create music that is well above the average. 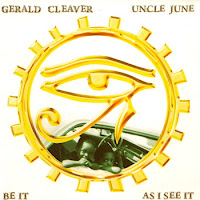 Unfortunately, Cleaver's own "Be It As I See It", is a little bit over-ambitious, mixing too many styles and trying to do too much in too short a time span. The band is as varied as the music, with Gerald Cleaver (d, perc, voice), Andrew Bishop (fl, ss, b-cl, ts), Tony Malaby (ss, ts), Craig Taborn (p), Drew Gress (b), Mat Maneri (viola), Ryan MacStaller (g), Andy Taub (banjo), Jean Carla Rodea, John Cleaver (voices).

It is too theatrical, too overwrought, insufficiently spontaneous, with and end result that is more emotionally distant and artificial than the composer could have wanted. That being said, there are some incredibly strong moments too, and without a doubt great musicianship.


Gerald Cleaver is one of the best drummers around, without a single doubt. Incredibly creative and inventive, with a magical sense of timing, pace and rhythm. I wouldn't say that all the above albums would sound dull without his presence, but they would surely miss a significant part of their appeal.

Cleaver is a drummer by nature.