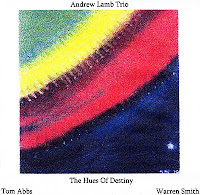 Jazz, and free jazz especially, is about directness, freedom, and a lack of formalism, and few other players combine these elements so well with the deep spiritual, festive and bluesy origins of the genre than saxophonist Andrew Lamb, here joined by Tom Abbs on bass and tuba (?), and Warren Smith on drums. And all three artists have performed and recorded a lot together. It's a real trio album, with a perfect cohesion among all three of them.

This album is more down to earth than the expansive predecessor "New Orleans Suite", although at moments, and especially in the title track, Lamb's playing is absolutely hypnotic, even sounding like North-African trance music.

On the other hand you have also pieces of less relevance, nice to listen to, like "Festival Di Mama" on which Lamb switches to flute, but with less gravity.  On the last track Lamb switches to pungi, an Indian reed instrument, offering the album a nice touch of universal spirituality.