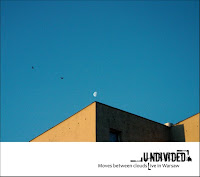 Last year, Undivided's "The Passion" won the "Happy New Ears Award", organised by this blog after a vote among you, readers. So it was with more than genuine interest that we started listening to its successor, which has again great artwork, both on the cover and inside the album.

Thematically, the music shifts from Christian spirituality to Judaism, with the reference of "Ohr Ein Sof" on the inside package, or the "infinite light" as described in the torah, of the creator's state of being before he created.

The music is as before clearly indebted to the Coltrane legacy, including Alice Coltrane, with long and slow thematic developments, post-bop, but then less focused on the musician's individual soloing as it is on the overall effect created by the entire band. As the spiritual theme might suggest, the compositions are full of reverend, solemn drama, exalted and expansive, trying to capture this state of being where there are no boundaries, no demarkations, no differences. Yet this does not mean that there is no musical substance here, quite to the contrary, the compositions, the harmonic development, the playing itself is again fantastic, with its own yearning aesthetic, and its integration of elements of various jazz subgenres, including today's music, but also klezmer. And all this is brought with the ambition of a classical symphony, flowing endlessly, full of majesty and grandeur.

A band with a great musical vision, and pitch perfect delivery. Again a great achievement.

Thanks for the review. I have been PINING for this album.