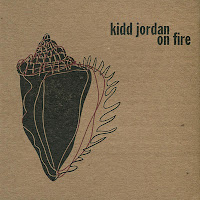 Saxophonist Kidd Jordan is no doubt one of the most under-recorded artists in free jazz, and this despite his age, musical skills and vision. His "Palm Of Soul" from 2006 was one of the best albums of the year in many lists, including mine and rightly so. Now, five years later, we find him back in the company of Warren Smith on vibes and drums, and Harrison Bankhead on bass, two musicians who are the perfect complement for the master from New Orleans.

Like the late Fred Anderson, Jordan is a highly rhythmic lyricist, someone who can build an improvisation and vary it endlessly, keeping the pulse, the concept and the focus throughout. Smith is the ideal sparring partner for many, but his percussive story-telling is picked up perfectly by Jordan. Their interaction on "The Evil Eye" is both subtle and ferocious, inventive and powerful, lyrical and wild, emotional and raw. It is during the softer, more spiritual second part of the piece when Kidd Jordan plays some of the most sensitive gospell-like phrases you will have heard in a long time, that Bankhead's warm bass underpins the mood perfectly, and gets a free opening to a lengthy bass solo, one that captures the spirit of the piece and moves it to a silent end, supported by some precise percussive effects by Smith.

Warren Smith starts the third track, "We Are All Indebted To Each Other", on vibraphone and accessory percussion, for a slow improvisation, with Bankhead, then  Jordan joining, again plaintive, deeply emotional in this overall quietly floating piece.

Bankead takes the lead on the last track, "Harrison Carries Out The Coffin", as an illustration that this is actually a trio creation, ending the album also in a very bluesy fashion, with the deep sounds of the Mississippi delta rising up through every note and lifting in today's free world, with sentiments of anger and anguish and joy resonating throughout, capturing history and delivering great art. Again a strong achievement.

Agreed, fine session - I always prefer to hear Kidd Jordan in a piano-less context like this.

Right on about Palm of Soul. It's a classic. I originally bought it because of the dream rhythm section. But Kidd is great. I have been looking for other work of his, so this one is a must.

I wish he recorded more.

Kidd recorded two sessions in New Orleans this past November (2011); both should be released by this summer. One is a duet studio concert recording with drummer Hamid Drake. The other is with trombonist Jeff Albert's quartet, which also includes Drake and bassist Joshua Abrams. The quartet recording features compositions by Kidd and Fred Anderson as well as group improvisations.