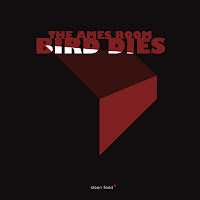 "The Ames Room is French altoist Jean-Luc Guionnet with Austrialians Clayton Thomas on bass and Will Guthrie on drums. This album is without a doubt one of the most intense you will hear, with Guionnet setting up the pace and sound from the start and then not letting go at all, despite the numerous variations within the very strict boundaries in which their cry of freedom erupts. This album is indeed one long shout, all in the same spirit : voluminous, expansive, full of drive and energy, relentless and raw, with a take-no-prisoners approach. The accompanying press kit speaks of "terror jazz", and the descriptor is not too far fetched."

This is how I described the band's album "In" released last year. I cannot add much more for this album : it is as ferocious, energetic and relentless, even further pushed to the limit because the album contains one single fourty-eight minute track, as recorded live in Lille, France in March 2010. Both Thomas and Guthrie have the approach of a rock band, bringing them closer to The Thing than to Brötzmann, while Guionnet keeps on hitting the same mid-range sonic attack with a limited choice of notes, no lyricism to speak of, but all repetitive assault of the senses, hypnotic, mad, as if something's got to give way, like an endless cry ...

For those of you who like to spice up their meals with dynamite, don't hesitate to buy this one.

The entire album can be downloaded from eMusic for just 0.49 euro, because it's only one single track, lasting 48 minutes.

Hard copies can be obtained from Instantjazz.

No more words needed, listen to an excerpt :

Just picked this one up. It's as advertised, really relentless but with a high level of musicianship. The live setting clearly prompted them to serious intensity.