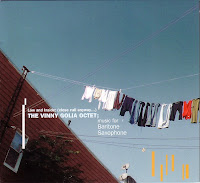 In this 12th month game of catch-up-on-reviews, my initial strategy was to look at William Parker's "Conversations", Ken Vandermark's "Mark In the Water" and Vinnie Golia's "Music for Baritone Saxophone", thinking that it too was a solo recording. It isn't. It's an Octet. Or is it?

Despite the name of the group (The Vinnie Golia Octet) there are only seven musicians listed—and no mention of who plays the clarinet (so very well.) Another inconsistency, Golia is listed as playing baritone and contra-bass saxophone (something he and Anthony Braxton have in common) next to a picture of a bass saxophone. A Benedikt Eppelsheim bass saxophone, if I'm not mistaken. Regardless of brand, a bass (or contra-bass) saxophone makes even the lamest of musical projects sonically rewarding. They make exciting musical projects unbelievably so.

Like "Strade d'Aqua" and "Apparent Distances", "Music for Baritone Saxophone" also prominently features the electric guitar. On "Music for Baritone Saxophone", Alex Noyce, who is somewhere between Jeff Parker and Mary Halvorson—is liberal with the distortion pedal and not particularly indebted to “jazz” or the jazz concept of the guitar. There is something about Golia's writing and arrangements that support and work synergistically with Noyce whereas with "Strade d'Aqua" and "Apparent Distances" that might not be the case. Which is to say, with the utmost respect and enthusiasm for this recording, that there is an element of fusion to be found through out. (Note the use of the lower case of fusion.)

This is not The Rippingtons, but instead a modern, thoughtful marriage of disparate elements. In the case of Golia and Noyce, think splash of spicy fish sauce in the Pasta Vongole. Fusion, with a capital F, is rightfully assailed for making slickness the prevailing ethos in every aspect of the musical venture—instrumental tone, contour of lines, clothes, hair, album covers, post production, marketing and beyond. Even Milford Graves has conceded that it's OK to eat a little white rice every now and again, and so a little slickness on the instrument born out of extensive labor and refinement, might not be the end of the world.

The musicianship totally and completely solid. The command is so trenchant, the movements so smooth and sure (don't call it slick) to where the over all feeling when listening is one of security. That's quite a feeling to have given how the ensemble careens around poly-rhythms and complex lines. In listening to "The Return of the Post Marathon Man" I couldn't help but think of a record called Studio Tan, the instrumental portions of side two in particular, by another East coast born Italian American Southern Californian—but with more longer, free-er horn solos.

What's not to like? Like "Kaiso Stories" by Other Dimensions in Music, there is the potential for musical diplomacy. Music for Baritone Saxophone is a recording that in its conceptual thoroughness and technical command richly rewards any listener but warmly welcomes newbie musicians and listeners “interested in improvised music but not sure where to start.”