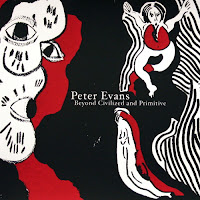 The LP (the product) - Normally I wouldn't discuss album covers in a review but here it seems an important part of the 'whole', a beautifully produced LP from Dancing Wayang records. The LP is beautifully packaged, if only simply, with (see above) a wonderful screen printed cover which folds out. There's a lovely inlay card which has the details of the music on it, printed on high quality card (like a wedding invitation) with close attention given to layout, fonts, and all the rest. To add to that the first 100 LPs get a free mini CD.

The LP (the music) - Even though this is a trumpet record the music is probably very much influenced by the works European sax improvisers such as John Butcher or Evan Parker, I'm sure one could site such trumpet masters Leo Smith and Bakida Carroll as people who have also worked in the solo area producing very interesting and influential works like this one. One thing that connects us to the Euro sax tradition is Evans use of alternative techniques such as extreme registers, multiphonics or circular breathing that enables him to produces hypnotic lines that can continue ad infinitum. Of course, that's not the whole record, Peter Evans has produced a well balanced program of 6 pieces (three per side) using a multitude of techniques and ideas.

The titles are all taken from Ran Prieur's 'Beyond Civilized and Primitive' and read like titles from a Charles Mingus album. In what way Evans (and the music) connect with Prieur's ideology is unknown but the titles conjure up images questioning what we perceive as conventional. The first track 'complexity, change, stability, giving, freedom, and both the past and the future' is a very simple and peaceful statement which develops into longer lines. Evans use of re-shaped sound makes one think of a trumpet played backwards, a technique he's used on other records.

On 'History is Broken' (Tk 2) the trumpet may be used as we expect but Peter Evans use of circular breathing makes this piece into a hypnotic soundscape that is punctuated by the sound of air being drawn in as the line grows blurred as it becomes frantic. Once the (long) line - a sort of contemporary flight of the bumble bee (there are no breaks) - one wonders how it will end, an abrupt pause only ends up heightening the tension as draws to it's conclusion. 'What is possible?' the last piece on side one returns to a relaxed and meditative state, using over dubbing to produce a large organ like chord drone bringing us back to the first idea (Tk 1) of melody and re-shaped sound.

Side two brings new elements to the table and works mostly with re-shaping the sound of the trumpet. The long titled 'We like hot baths and sailing ships ......... we get eaten by roving gangs.' (there are 59 words all in all) being an experiment in multi tracking and re-shaped sound whilst the second track develops traditional trumpet playing by using anything but notes. The last piece of this excellent release 'our nature is not a location' reminds us of peaceful simplicity, yet anyone who knows Evans playing will know that extremes and the unexpected are never far as we a caught out at the closing notes.

The Mini-CD (if you bought one of the first 100 records) - 4 tracks make up this mini CD. Although it may be unintentional, it seems the mini-CD has a more abstract direction. The music on here takes (to my mind) a different direction to the accompanying LP, and in a way it's a perfect compliment, giving us a different style of music which is constantly probing and fascinating. Limited edition of 500 LPs.

By from the label.

Whoops, we forgot to add the link to buy the album -