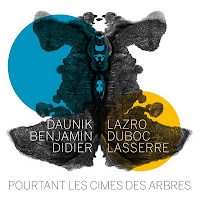 "The moon passes quickly
Treetops are still holding
The rain"

I am not sure whether the French or English translation do credit to Japanese haiku master Bashō's original verse, yet the music on this fantastic album by the French trio Daunik Lazro on baritone saxophone, Benjamin Duboc on bass and Didier Lasserre on snare drums and cymbals manage to evocate the short poem's wonderful power.

All three musicians understand the power of restraint, the value of  less-is-more to create depth and tension and beauty, and they also manage to play in a very natural way, in the most literal sense, to sound like something organic, like wind and rain and the unidentifiable rustling of leaves and maybe even the sound of clouds, barely audible as the moon races past them.

What they do even better, is to understand the magic of the paradox that lies at the heart of zen but also at the heart of all great art. As the moon passes quickly, the tree remains fixed, protecting the little rain drops from falling - movement and motionlessness, fragility and strength, light and darkness, and then the incredible use of the word "pourtant", in English translated as "still", not the same meaning and I think the French is stronger, at the same time disjointing nature's logic, as if the moon's speed can have a causal effect on trees.

The music is like the haiku - sounds arise out of nothing, and the trio shapes something light and fragile on the spot, something fleating and evasive, using their instruments like extensions of nature, as the physical items they are, creating a sparsely filled canvas, a sonic representation of the vivid imagery of the poem.

The first three pieces are "Une Lune Vive", "Pourtant", and "Les Cimes Des Arbres" and they are the most abstract, undefined, conflicting, but then the last track "Retiennent La Pluie" changes approach, for the more protective slow moving elegy of baritone aesthetics, bluesy and deep and moving, full of power, subtle and sensitive, soft and unleashing all the built-up tension at the same time for a new perspective, as the last line of the haiku should be.