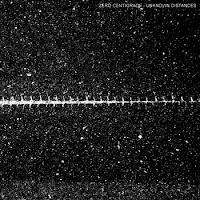 The adventure continues - Vincenzo and Tonino return with yet another concoction of their sonic explorations with Vincenzo handling the trumpet and Tonino taming the guitar. This time around, the release is via the small Polish label Audio Tong which seems to be the perfect outlet for the likes of such experimental and unclassifiable music. The treatments of the instruments are pretty much the same as what we experienced in the first release but what is different here is the layout. Whilst the duo dabbled in fairly long pieces (the average length clocking at around 8 minutes) in I'm Not Like You, in Unknown Distances the songs are relatively short.

This setting, in my opinion, is ideal for kind of the output that this duo produces - engaging not grating, occupying without meandering. Another factor that works in the favour of the musicians is the fact that there is a more constructive feel to this entire outing - mind you, the instruments are still subjected to all the extremities they can endure to produce sound but there is an underlying and palpable theme that pervades the 40 odd minutes musical journey.

The opener, Into the Storm, almost reminds of the music in one of the fight sequences in the movie, The Hero (the Quentin Tarantino one) - discordant plucks of the guitar with some eerie background compositions (Tonino is credited with "compositions" in the CD; I believe this has to be it). Clouds #1, the third and also one of my favourite is one track that seems to approach a semblance of melody with the guitar but chaos soon follows but unlike the earlier album the breaking of melody here is more through minimalist rather than violent means, that makes for a far more pleasant listen. Dry River is another strong track that almost flirts into a tune suggesting a strong underlying structure waiting to be unearthed.

I am not going to debone track by track for I believe every track has its own story to tell for this time around, the duo seem to have an eerie consistency that pervades the entire album and that consistency is something I like - there seems to be a destination and all the atonal plucking and scraping seem preordained to keep this feeling alive (take for instance the tracks good morning and upward - the former has an almost jaunty feel about it while the latter uses repetition to build a more tangible and salubrious structure - both fit perfectly well into the flow of the album; clouds #2 followed by cleft are both tracks that seem to use minimalism very effectively; under the volcano – well I think it suffices to say that is a track that carries a perfect name!!).

The entire album ebbs and flows - building and releasing tension, hinting at themes that go into disarray soon after, haunting yet beautiful at times. The entire music is tighter this time evoking a wholesome listen while the earlier effort was a little disjoint. Once again, without any hesitation I will recommend this album to the more explorative listener - there is more depth and more purpose to this outing that the previous one. Even thought I cannot put my finger on it, there is some element that is just waiting to be tapped in this music - maybe another instrument or maybe timbral changes - when that’s revealed this music is going to be that much more irresistible, here's hoping that the duo manages to nail that.