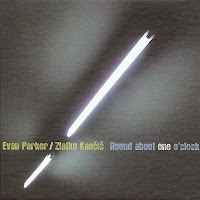 What if, in 2012, Evan Parker released 500 totally excellent recordings--each and every one of them a stirring exposition of the furthest reaches of improvisation and saxophone playing?

Could a super abundance of Parker's music result in a devaluation of it? Could someone of Parker's musicality become normalized and taken for granted the same way as John Phillip Sousa? What if in 2012 Parker released 0 albums, but instead began working on one to be released in 2019. Would that make Parker's music any more valuable than it is now?

Listening to Round About One O'clock by Evan Parker and Zlatko Kaučič makes me wonder if Parker has fallen into a rut of totally predictable excellence and invention. Parker is a full fledged, heir to Coltrane's aesthetic line, as much as Archie Shepp, Albert Ayler, Charles Gayle or Michael Brecker for that matter. Can Parker do anything but kick ass? Can we record him then? It's hard to imagine an uninspired sound or a dull phrase coming from Parker's horn.

With Parker's eminently high functionality as a constant, his collaborators become the focus. On the one hand, why Kaučič? Of all the drummers in the world, why him? On the other hand, at this point in Parker's discography, why not? Kaučič keeps pace, playing what the facebook page calls “ground drums.” Kaučič kit has a warm, “organic” sound (for wont of a better term), tonally to similar to Milford Graves. It is in those moments where Kaučič approach owes more rather than less to Graves when Kaučič is at his most exciting and compelling.

Once all the compelling excitement is over, however, we are still left wishing the Parker/Graves performance in 2009 at the Stone in NYC (what little there was of it) was also part of either Parker's or Graves' recorded output. Graves has a way of putting horn players pull up their socks unlike anyone else. (Paul Lovens is no slouch either.)

Of all the horn players ready for significant musical demands, Parker is at the top of the list. If Parker isn't going to make any horrible recordings, then only the remarkably super human (like a duet with Graves) can add counterpoint to the vast bulk of Parker's output, which has flat lined at merely fantastic, Round About One O'clock included.

Always enjoy Mr. Zappa's reviews. A recent high-water mark for Parker IMO is "Bauhaus Dessau" by his trio with Schlippenbach and Lovens.