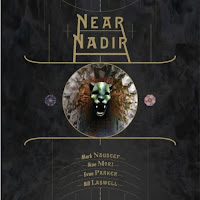 It seems like it was just yesterday that I was listening to and picking up on the earth/wood element aspects of Zlatko Kaučič drum sound.

Borrowing further from Wu Xing theory, today's examination of Evan Parker with Ikue Mori, Mark Nauseef, and Bill Laswell leans heavily toward the metal/water side of the cycle. Mori's electronica and Nauseef's employ of the Gamelan's sound palette are synergistic, creating a hospitable environment for Laswell's low end sensibilities.

The three together make a decidedly “new” compositional and sonic backdrop for Parker's unprocessed acoustic saxophone. Say hello to the future of the rhythm section. Here (again, as usual) is where Parker shines. What must have been dismissed at least once in his career as a gratuitously idiosyncratic, a-musical, national security risk approach to playing the saxophone was more than likely Parker remembering this very future when the buttery tones of Coleman Hawkins would no longer be an appropriate vehicle for that which needs expressing in the year of our Lord 2011.

Parker is on soprano for most if not all of this record (with only a low resolution scan of the cover, you can never be too sure). When Parker does play the horn “normally,” the effect is startling. Parker invokes more Wayne than 'Trane in those moments when he's invoking someone other than himself. At the risk of excommunication, not that Parker ever really gets “hysterical” on the instrument, there is a palpable amount of measurement and calm both in Parker's playing and the ensemble as whole.

To say 'Near Nadir' brings ceremony to mind is usually the sign of desperation in journalism and/or a misunderstanding of ceremony (I plead guilty on both counts.) Be that as it may, the recording's pacing, the relatively short length of the pieces as well as their asymmetry and harmonic tension earns 'Near Nadir' my vote for best musical Kōan, 2011.