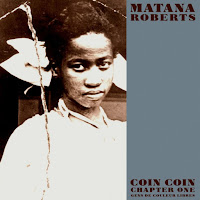 Three seconds into opener ‘Rise’, and you know this is going to be special. The fierceness that runs throughout the album is not merely a characteristic, but a method, an indictment, exorcism and history lesson. That Roberts manages to unite a universal message and the intensely personal is one of the album’s most striking merits, while combining free jazz, swing, folk music (spirituals, lullabies, the blues), the Bible and the oral tradition to accomplish a musical equivalent of Toni Morrison’s stories.

The music has ties to the rough-edged fire music of the sixties – the Ayler- Shepp-Sanders-axis, in particular, but it’s also a collective triumph for saxophones, trumpets, violin, prepared guitar, bass, drums, singing saw and vocals, teetering from Mingus-styled grooves to dense and mysterious imaginary soundtracks and back. And it is a record of childish unpredictability and diversity, with a ‘compositional sound language’ that’s channeled by ways of a graphic notation system. Also striking, and something which might alienate or irritate you as much as it might cause the shivers to run up and down your spine, are the vocals, which are playful and soothing the first moment, and incredibly harsh and haunting the next.

When Roberts unleashes (and that’s the only appropriate verb) her demons in ‘Pov Piti’ and its emotionally charged counterpart ‘I Am’, you’re being maimed by oppressive expression in its purest form. It is the blues, it is a peek into unresolved emotional issues, complete with regret and pain seeping from those open sores. But “Coin Coin” is not all about agony.

It is a strikingly rich album, full of throbbing grooves (‘Song For Eulalie’, being a wonderful example), spoken word interludes and blues-drenched, carnivalesque climaxes, that ultimately ends on a hopeful, life-affirming note: “I know how precious our lives can be / dedicate this moment to you and me / let’s dance / celebrate life”.

A history chapter, a therapeutic session, a sonic novel bursting at the seams. This could’ve been an ambitious failure, but it became a full-fledged triumph. A demanding one, yes, but music shouldn’t refrain from asking the listener to make an effort. Or should it? The best news: this is supposed to be the first chapter in a twelve-part cycle. If she manages to keep this up, it’ll be a major achievement.