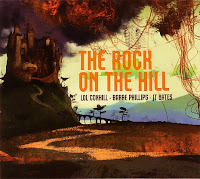 In 1981, British soprano saxophonist released an album with a solo performance at Théâtre Dunois in Paris, France. Now, thirty years later, his peculiar tone is animating the same venue in a trio with Barre Phillips on bass and JT Bates on drums,

Coxhill's tone holds the middle between moaning, singing and speaking, warm and uncannily human, yet this is really a trio album, with all three musicians taking the stage and alternating ideas. The whole environment is calm and peaceful, with lots of attention to improvisational details and precise interactions, even more accentuated by the space they offer each other, with long moments of solo and duo playing.

The band's strength is the variation they bring in the seven improvisations, each piece having its own character, with "Rivers Bend", sensitive and lyrical, "Anything So Natural" with indeed a great natural pulse, "Scratch" being angular and abstract, "Ergo Somme" lyrical and sweet, "The World Is A Grain Of Sand" starting minimalist with little notes full of hesitant surprise and wonder and evolving into long arco bows, "Tarentelle For Nelly" a nervous staccato character impro driven by Bates, "Full Of Butterflies" finally is a moving sensitive lyrical finale, yet equally closing the circle.

Free improvisation in the European sense, but then light-textured, lyrical and very open-ended, played by three musicians who have nothing to prove, who do not need speed, or pyrotechnics, or shock, or volume. Just their instruments, and calm and accurate authenticity.

Bought this album months ago but never quite got into it. I was actually really disappointed about the whole performance.

But thanks though, reminds me to give this album one more chance.