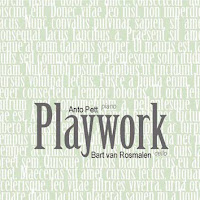 Somehow over the years my musical preferences have changed, possibly because of the hours of listening to music on a daily basis, forcing myself to listen, and I find myself increasingly captivated by what most people might consider "beyond music". I will review a number of these albums in the coming days, highlighting some of the better ones, and if time allows, comparing them to some other works that fall a little bit short, even if I do not like doing that.

Let's start with an album that was an absolute ear-opener even at first listen, bringing the wonderful interplay between Estonian pianist Anto Pett and Dutch cellist Bart van Rosmalen. Pett developed his own improvisation strategies, of which you can find some teachings on the internet, but here he goes beyond the science of his explanations, and actually demonstrates the magic of its results, if performed by virtuosi.

You can almost say nothing else but that the music determines what the players do. It is the creation of the initial character, atmosphere, approach of the music that grows into a further deepening of the concept without actually altering, just offering more shade and color. Both musicians feel equally comfortable in the concept and with each other, co-creating at the speed of light, with unbelievable rhythmic explorations, or to keep the idea, being co-created simultaneously by the pieces themselves.

The chamber music line-up and the  lightness of the overall sound are deceptive, because luckily the substance and depth offered by the music make this incredibly rewarding music for many, many times of listening again and again.

Despite the fact that they use all timbral possibilities of their instruments, ranging from the crystal clear over raw, muted to distorted sounds, the coherence of each piece, and the only gradual insertion of dissonance make this still - I think - relatively accessible, but that may be a strong overstatement.

In any case, lovers of improvisation should listen to this. This is music to be really enjoyed, full of grace and expressivity and drama and subtlety and an inherent playfulness, as if music reveals itself anew.